(CNN) -- Pontiac lovers are feeling nostalgic and mournful Monday amid General Motors announcement that it will end production of the car. 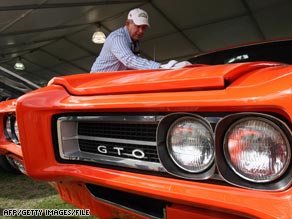 Pontiac models, such as the 1969 GTO, helped usher in the era of the muscle cars, enthusiasts say.

"I had two brothers, and they each had one of these cars," she said. "The GTO represented the suburban culture of its time, heavily laden with root beer and plain beer."

"Those were the days of Bob's Big Boy [hamburger restaurant], when girls wore skates. Back then we pleasantly wasted gas looking for fun. It was a social thing."

Debuting in 1964, the Pontiac GTO is widely regarded as the original muscle car. It was a risky model in that it featured a big-block engine in an intermediate-size frame.

The GTO's success not only buoyed GM but helped jumpstart the high-performance market for Detroit's Big Three automakers -- and ushered in the era of the vehicle as status symbol.

Watch GM's CEO explain why the company is cutting Pontiac »

"It was a chick magnet, for God's sake. Even from a girl's standpoint," Lindsay said.

Pontiac's other emblematic performance car, the Firebird Trans Am, featured the outline of a firebird on the hood -- the whole hood. It enjoyed a rise in popularity and brisk sales after being featured in the "Smokey and the Bandit" movie franchise beginning in the late 1970s.

But like even the most sturdy odometer, the numbers, years ago, had begun to work against Detroit.

After years of watching their market share erode to foreign automakers, GM, Ford and Chrysler were beset by a perfect storm of declining sales, slow innovation and a dogged recession. While all three shed jobs, GM and Chrysler took bailouts to survive; Ford chose to rely on its cash reserves to ride out the storm.

In February, GM announced the end of the Saturn and Hummer lines while casting a ray of hope for Pontiac enthusiasts by saying that the brand would survive but be scaled back to a niche product.

GM could file bankruptcy as a June 1 deadline looms. In the midst of pressure from the Obama administration to present a restructuring plan that shows the company's long-term viability, the automaker recently released a statement to downplay fears that brands Americans have patronized for generations are on the chopping block.

"General Motors has not announced any changes to its long-term viability plan or to the future status of any of its brands," the automaker said Friday in a statement on its Web site.

Pontiac fans said on Friday that contemplating the closure of Pontiac feels like a longtime friend pulling out of the driveway for the last time.

"I think it's crazy [to end the brand]," Max Thompson of Huntsville, Alabama, said. "I think they ought to streamline versions of Pontiac. Just take it to a few models. Make it special, but not get rid of it because it's too iconic." ireport.com: See Thompson describe his wheels

Thompson, 46, said his 1973 Firebird Formula had him sold when he saw the stylistic front end.

"The hood of it looked cool," Thompson said. "Just the front of it, it was a sexy-looking vehicle. It had a very sleek look for the time." Thompson said he doesn't drive his Firebird anymore, preserving it as a memento with 65,000 miles on it.

The Pontiac brand didn't just appeal to baby boomers. The younger generation seems to have bonded with the brand during their time behind the wheel, too.

Brian Hemgesberg of Flint, Michigan, said one of the reasons why he purchased his 2008 Pontiac G6 last year was because of what's under the hood.

When asked if he pushed the engine, Hemgesberg, 22, let out a telling laugh. "Yeah," he said.

Like other Pontiac owners, Hemgesberg doesn't want to see the brand die. "I think it'd be a pretty big mistake. I won't stop buying GM, I'd just buy Chevy. I think [Pontiac] is just a very good brand of car."