WASHINGTON (CNN) -- When Washington manicurist Lidia Schaefer returned to her native village in Ethiopia, she was troubled by what she saw: children walking three hours each way to attend classes held not in a school, but under a tree. 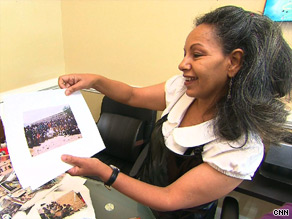 Lidia Schaefer sold her house and car and set aside tips and part of her salary to raise money for the school.

When she learned in 1998 that one of the girls she'd met -- Medhine -- had been attacked and killed by a hyena after falling behind other children during the long trek home from school, Schaefer knew she had to act.

She began setting aside a third of her salary and all of her tips, and later sold her house and car, to raise enough money to build a school for the village.

"This is the kind of thing that you hear about Oprah Winfrey doing." Do you know a hero? Nominations are open at CNN.com/Heroes

Born in Feres Mai, a large village in northern Ethiopia, Schaefer moved to the United States in the mid-1970s when civil war broke out at home.

During her troubling visit back home in the '90s, she recalls, "I promised the children I was going to open a school for them."

But she had no idea how to tackle such a big project, especially while raising her own two children and working 12-hour days, six days a week.

The motivation to fulfill her promise came with the news of Medhine's death. "That really pushed me to do it," she says, "to build a school so that wouldn't happen again."

Schaefer lobbied the Ethiopian government to donate land in a central location so the school could serve children from several nearby villages. The decision was made to build a secondary school, since the nearest one was more than 18 miles away.

Back in Washington, Schaefer began setting aside money for construction of the school.

"I was working two days for the school, four days for me," she recalls. Her clients and co-workers rallied to help, holding raffles and making contributions. Several clients bought individual doors or windows for the school.

Watch Schaefer talk about the school »

But Schaefer realized it wouldn't be enough. To finish the school, she needed to do something drastic. In 2002, she gave up her symbols of the American dream, selling her home and car. It's a sacrifice that still stuns her colleagues and friends.

"I couldn't believe it," remembers salon manager Patty Gonzalez. But Schaefer saw nothing remarkable about her decision. "I don't feel like I [gave] up a lot," she says. "I want [the children] to learn, to get something out of their life."

Schaefer ultimately raised more than $250,000 for the school, which was completed in 2006. When she went back for the dedication, Schaefer was honored with an elaborate procession through the village. For her, it was gratifying to see what she'd accomplished.

"I was so happy, I can't even describe it," she recalls.

Today, nearly 1,500 students are educated in the school, which boasts an eight-building campus with 16 classrooms, a science lab and library.

"It's simple, but it's nice," Schaefer says. Though she'd hoped to name the school in memory of Medhine, the government -- which runs the school -- instead named it the Lidia Secondary School, telling Schaefer, "We want it to be your name so that more people [will] be like you."

Schaefer has indeed inspired many others to follow her example. When Ethiopian communities around the United States heard about what she'd been able to achieve, they launched an effort to build more schools in her region of northern Ethiopia. So far, they've raised enough money to build 12 schools, due to be completed by July 2009.

Schaefer still sets aside her tips and wages to support her school and has kept up her fundraising efforts to buy supplies. A colleague at the salon designed T-shirts to raise money for desks for the students. Schaefer's next goal is to equip the school with computers.

"They need computers so they can talk to the whole world," she says.

Her colleagues and clients say Schaefer serves as an important reminder that people don't need money or power to make a difference.

"She's very inspiring to me," says Gonzalez. "I've learned from Lidia that even if the project is big, if your heart is in it, you can do it."

Want to get involved? Check out Lidia Schaefer's Web site and see how to help.