Tiny librarian is hell on wheels

(CNN) -- She's petite, she's middle-aged, she's bookish, and if she gets a chance, she'll knock you on your keister. 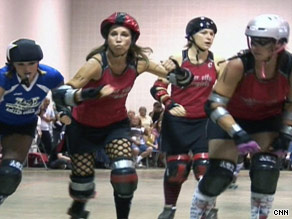 Beth Hollis, second from left, is a librarian who's become a MegaBeth, a roller derby dynamo.

Hollis has been fitting in at the Akron-Summit County Library for 27 years.

"She's my hero," said Diane Barton, 48, who has worked with Hollis at the library for 18 years. "I just think it's so cool she's doing something so different and so active and so aggressive. You know how we are. We're librarians, so we tend to have that meek and mild stereotype."

Watch her in action as Beth and MegaBeth »

Before discovering roller derby, Hollis had been casting about for a hobby.

"I tried knitting and literally got kicked out of the knitting class for just not being able to get the hang of it," she chortled. "I guess it was just too soon for me to try knitting. I needed something that maybe was a little bit more physical for a hobby."

She visited a Rubber City Rollergirls practice last winter after telling her husband, Warren, a retired high school math teacher, that she was going to an audition.

Roller derby is a real sport, having ditched the campy, WWE-like spectacle seen on TV in the early 1970s. The Rubber City squad practices six hours a week and competes against teams in Ohio, Michigan, Indiana, Pennsylvania and Kentucky.

Roller derby isn't as confusing as it first appears. Two teams of five players each line up on the oval track. Four are blockers, whose job is to knock down or otherwise impede the opposing players and to open the way for the fifth teammate, called the jammer, to make her way around the rink. The jammer scores a point for every opposing player she passes. If she laps everyone, she earns an extra point for her team. Each round, or jam, lasts two to three minutes or until the lead jammer calls it off. The teams play two 30-minute halves, and the team with the most points wins. Quirky uniforms and tough-chick nicknames add to the fun.

A roller derby match, called a bout, consists of two 30-minute halves. Each team has four blockers and one player called a jammer, whose job is to get past the other team's blockers on a 235-foot oval flat track and lap them to score points. Both teams are on offense and defense simultaneously, and the action is fast and rough.

And she's an inspiration to the other players.

"It makes me actually excited to think that I could play ... for another 30 years, and that's awesome for me, because this is like my favorite thing to do," said Barb "Barbonic Plague" Brown, who at 21 is the youngest player on the team.

Hollis has earned the respect of her team captain, too.

"She's so tiny -- she's probably like 5 feet 4 and maybe 110 pounds or so -- but when she's out there, she's MegaBeth," said Tracy "Eighty-SixHer" Soulsby, 40. "I wouldn't say she's a very hard hitter, but she's a good blocker. Her strength is getting in people's way and then keeping them behind her, not letting them get around her."

The MegaBeth legend grew during a June bout with the Glass City Roller Girls, a team from Toledo, Ohio. Hollis found herself contending with a 6-foot-1, 220-pound foe who goes by the name Pamazon.

"Out of the corner of my eye, I saw her just take out this one girl, and I remember, the crowd just went wild. It was fantastic!" Brown recalled.

"I think that might be the highlight of her season," Phillips said.

For her part, Pamazon -- aka Pamela Keppler -- said she's never been knocked down in a bout.

"To be completely honest, I don't remember MegaBeth that well from the bout," she said. "I do remember talking with her at the after-party. We were all pretty surprised by her age, and I remember her saying that I knocked the snot out of her."

"It really makes it exciting when you've got all those people cheering," Hollis said. "And as we progress through the season, it's obvious that we've gotten better ... and the fan support has just gotten louder."

But the glory comes at a cost. Two Rubber City Rollergirls have suffered broken legs -- in practice! -- and one is about to return after breaking her shoulder and nose in a bout.

"It's inevitable that you're going to get scrapes; you get rink rash and bruises," said Hollis, who wears number 796.21 -- the Dewey Decimal library index number for skating.

"I took a pretty tough fall to my hip that had me a little concerned. As I said to my teammates, at my age when you break a hip, it's the beginning of the end."

Asked whether she has hurt anyone else, the mother of two college graduates replied furtively: "I hope so."

Librarian Hollis isn't the only player smashing stereotypes. Among her teammates are teachers, a Starbucks manager, an accountant, a nurse practitioner, a barmaid and a couple of waitresses, most of whom are on the small side, Soulsby said.

"It's not just rough-and-tough, big, burly gals out on parole," Hollis said.

Perhaps just to keep it real, the team does include one former repo driver (Valcano) and a heavy-equipment operator (BulldozeHer Bo).

Barton, her fellow librarian, says there's something different about Hollis since she laced up her skates.

"It may just be my imagination, but she seems more confident in a way," Barton said. "It has to empower you somehow."

Hollis says it's good for people to test themselves with change.

"I encourage people to pursue things -- something like this -- that they think might be fun, and not to let stereotypes get in the way of whether or not they think they're going to fit in," she said. "Because you never know."

All About Ohio • Extreme Sports • Libraries