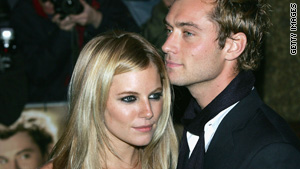 Actors Sienna Miller and Jude Law were engaged when he had an affair with a nanny who tended to one of his kids.
STORY HIGHLIGHTS

(CNN) -- If you were to judge the success rate of monogamy by the sex lives of public figures, perhaps couples should change their marriage vows to say, "Till a tempting new partner do us part."

But do they just illustrate the realities of modern life?

In the age of hookups, friends with benefits and online dating, and as human life expectancy grows, is it still reasonable to expect people to pair up and stay monogamous until death do them part?

Added evolutionary biologist David Barash, "It's within the realm of human potential, but it's not easy."

Lipton and Barash, who have been married 32 years and are the co-authors of "Strange Bedfellows" and "The Myth of Monogamy," said serial monogamy may be more realistic -- a model in which people move from one committed long-term relationship to another and choose partners for different reasons at different stages of their life.

For some, even serial monogamy seems too restrictive.

The 1970s introduced the concept of "open marriage" in which couples stayed married but were free to date other people.

More recently, polyamory -- the practice of having romantic relationships with multiple people at the same time with the full knowledge and consent of all involved -- has been getting a lot of attention.

"We found the expectation that one person should be our everything seemed unrealistic given our day and age. ... It's oddly pressuring to set up that scenario," said Mark, who lives in Springfield, Missouri, and is in a polyamorous relationship. (He asked that his last name not be used for privacy reasons.)

Mark, 42, has been married for five years. He and his wife tried different things to spice up their marriage, including swinging, or having casual sex with other people, he said. But they found the experience unfulfilling and decided what they really wanted was to be able to fall in love with others while staying together.

Mark dates another woman, and his wife, who declined to be interviewed for this article, is dating another man. The four of them frequently get together to have dinner or watch movies.

"People describe polyamory as 'poly-agony' because of all the work you have to do to maintain things," Mark said. "It's just not normal to look over and see your wife with another man. I know a lot of people would have a real problem with that. I really don't."

Video: Polyamorous relationships
Americans are too surprised by infidelity when it happens. I think we go into marriage with perhaps unrealistically high expectations about human nature.
--Pamela Druckerman, author
RELATED TOPICS

The ultimate goal is for everyone in the group to live together, Mark said.

"This isn't about having affairs, it's really about being able to be open and loving," he added.

Researchers studying polyamory estimate there are more than half a million polyamorous families in the United States, according to Newsweek.

People seeking shorter, more secretive dalliances now have more opportunities than ever online. One example: The Ashley Madison Agency, a dating Web site for married men and women, which claims 4.5 million members and greets visitors with the motto, "Life is short. Have an affair."

No wonder many people believe monogamy is completely on its way out. French author Jacques Attali in recent years wrote, "Monogamy, which is really no more than a useful social convention, will not survive. It has rarely been honored in practice; soon, it will vanish even as an ideal."

Cultural give and take

That ideal may depend on where you live.

A journalist who traveled the world to examine how adultery is viewed by different cultures said Americans have a harsher view of infidelity than people in practically any other country.

"Americans are too surprised by infidelity when it happens. I think we go into marriage with perhaps unrealistically high expectations about human nature," said Pamela Druckerman, author of "Lust in Translation."

The French, in contrast, are as hopeful about staying faithful as Americans when they get married, but if one of the spouses has an affair, they are able to accept it as something that can happen over the course of a long marriage, said Druckerman, an American who lives in Paris.

When French President François Mitterrand died in 1996, for example, his longtime mistress and their daughter attended his funeral -- at his widow's invitation.

"[Americans] think if an affair happens, it's the end of the story, the fairy tale has been completely shattered, the person isn't the person we thought they were. The knee-jerk reaction is you have to get a divorce," Druckerman said.

"[In France,] there's less of a sense that the person who cheats is a terrible human being or that this is a marker of a person's whole character."

In Russia, Druckerman found that infidelity is considered a pleasurable vice, like smoking cigarettes. In Finland, sex in general is viewed as a very positive experience, so when a person is presented with the possibility of a sexual experience, it's in some ways socially sanctioned to pursue it, Druckerman said.

Famous and powerful are different

Experts on relationships and human sexuality said that while we may not be wired to stay faithful to one partner for a lifetime, we can make a conscious decision to do so -- a choice that still comes with powerful emotional, biological and economic benefits.

And while the sexual exploits of celebrities such as David Letterman can be shocking, it's important to remember that powerful or famous people can have more inclination, opportunity and resources to stray.

"They are used to the adrenaline rush in terms of being out there in the limelight. ... I call them adrenaline junkies," said Terri Orbuch, a professor of sociology at Oakland University and author of the new book "5 Simple Steps to Take Your Marriage From Good to Great."

"They need that passion and excitement in their relationships."

That can make famous or powerful people more likely to look outside their marriage to continue the adrenaline rush, Orbuch said.

Power, wealth and fame are also well-known aphrodisiacs that attract lots of potential new sexual partners -- an issue with which typical couples may not have to grapple.

Whatever the temptation, most people still prefer to be in a monogamous relationship, said Nadine Kaslow, a professor at Emory University School of Medicine who specializes in couples and families and who also is chief psychologist at Grady Health System in Atlanta, Georgia.

"People feel safer and they feel more trusting. They feel like they can depend on their partner," Kaslow said. "I think that we can make choices in a different way than [other] mammals and think through the consequences of things."

Those consequences can be huge, in many ways. Nature has provided powerful incentives to stay faithful that are still valid.

"There are a lot of reasons why sexual monogamy is in people's interests," Lipton said.

"Because whether it's raising children or avoiding emotional chaos and drama, like what David Letterman is facing, or whether it's building an estate and avoiding conflict about estate planning, there are lots of reasons that two people who cooperate are better off than one person alone or one person who is a cheat."