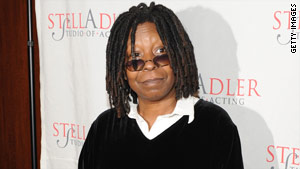 Whoopi Goldberg is just one example of a celebrity who has been diagnosed with dyslexia.
STORY HIGHLIGHTS
RELATED TOPICS

(MentalFloss.com) -- Molecular biologists Carol Greider and Elizabeth Blackburn recently became the first two women to share the Nobel Prize in Medicine. Greider also joined Pierre Curie and Archer Martin among the handful of individuals with dyslexia who have won a Nobel Prize.

In honor of Greider's accomplishment and National Dyslexic Awareness Month, here's a brief background on dyslexia and 11 other dyslexic celebrities.

According to the International Dyslexia Association, dyslexia is a language-based learning disability (or difference, if you prefer) that may affect an individual's ability to read, write, spell, and pronounce words. It is the most common learning disability.

Contrary to popular belief, people with dyslexia do not read "backwards," though many dyslexics do a variety of other interesting things, as you'll read below.

1. Henry Winkler
With his greased hair, leather jacket, and jeans, Winkler was the epitome of cool during his decade-long run as Fonzie on "Happy Days." If only Winkler, who was diagnosed with dyslexia when he was 35, knew how to ride the motorcycles that were as much a part of the Fonz's character as his signature two thumbs up.

"One of the effects was being unable to make my brain understand how to coordinate the clutch, throttle and brake on a motorcycle," Winkler said of his dyslexia in 2008. "There was just no way I could figure it out, so I never got to ride that cool Harley-Davidson."

Instead, the motorcycle was mounted on a wood base with wheels for all of Winkler's riding scenes.

Winkler was ridiculed for his dyslexia as a child -- his parents called him Dumb Dog -- so it's no surprise that he's become an activist for others with dyslexia. Since 2003, he has published more than a dozen books about a fictional 10-year-old boy with dyslexia named Hank Zipzer. The books have sold more than 20 million copies.

2. Keira Knightley
Knightley, who starred alongside fellow dyslexic Orlando Bloom in the "Pirates of the Caribbean" series, has her dyslexia to thank for jumpstarting her acting career. Well, sort of.

Knightley took an interest in acting at a very young age, but struggled to learn to read. When she was six years old, her mother bribed her with a promise to get her an agent if she practiced reading every day during the summer.

"She felt so guilty at having made a six-year-old daughter do this that she had to get me an agent at the end of it," Knightley recalled in 2003.

Bizarrely, Knightley's former school headmaster questioned the veracity of her claims that she was dyslexic in 2004, to which Knightley replied, "Of all the things you could lie about, I'm not quite sure you would lie about that one."

3. Whoopi Goldberg
Goldberg dropped out of high school, became addicted to drugs, married her drug counselor, and had a child by the time she was 19. She wouldn't be diagnosed with dyslexia until years later.

"You don't want to be retarded all your life," Goldberg told Ebony magazine in 1991. "I was retarded for a good part of mine, according to all the paperwork, and I just couldn't handle it."

Goldberg eventually got her life on track, catching her big break when Steven Spielberg, a dyslexic himself, cast her in "The Color Purple."

4. Ingvar Kamprad
Ever wondered why IKEA products are named after Swedish places and things? Kamprad, the company's wealthy founder, is dyslexic, and thought it would be easier to remember product names that way. The acronym IKEA is made up of the initials of his name, the family farm where he was born (Elmtaryd), and the nearby village of Agunnaryd.

Mental Floss: 5 things you don't know about IKEA (but should!)

5. Bruce Jenner
Jenner, who won a gold medal in the decathlon at the 1976 Summer Olympics and was diagnosed with dyslexia at a young age, has often described his dyslexia as his greatest gift.

"If I hadn't been dyslexic, I wouldn't have won the Games because it made me special, being dyslexic," he said in 2004. "If I would have been average like everybody else, I wouldn't have needed sports at a young age. I always tell dyslexic kids, 'You may think of this as a big problem now. But it may be your greatest gift. It makes you special. Now your job is to find out what you're good at and go for it.'"

Jenner has helped preach this message through his role as a motivational speaker and as the host of Demystifying Dyslexia, a documentary that describes modern learning tools for people with dyslexia.

6. Alyssa Milano
Milano, who will be starring in the upcoming ABC comedy "Romantically Challenged," copes with her dyslexia on the big stage by following a tip she received from the late British actor Sir John Gielgud. Milano starred alongside Gielgud in the made-for-TV adaptation of Oscar Wilde's "The Canterville Ghost" in 1986.

"When I asked him how he memorized his monologues, he said, 'I write them down,'" Milano recalled in 2003. "I use that method to this day. It not only familiarizes me with my words, it makes them my own."

7. Ozzy Osbourne
MTV's hit reality show "The Osbournes" was originally slated to have sub-titles because nobody could understand what Ozzy was saying.

"Even I couldn't understand what the [expletive] I was talking about on television," Osbourne told The Daily Telegraph.

Osbourne grew up a severe dyslexic and dropped out of high school, turning to music, drugs, and alcohol to occupy his mind and time. During a 2007 interview with the London Evening Standard, Osbourne explained why he's never read the Bible.

"Have you ever tried to read that thing? I wouldn't have wanted to be alive in those days, when Adam lived to be, like, 1,000 years old. I can't do it, being dyslexic. By the time I finished page one, I'd be dead."

8. Cher
Cher dropped out of high school before launching her successful career and wasn't diagnosed as dyslexic until she was 30. The diagnosis came only after she arranged medical tests for her daughter, who was struggling in elementary school.

"I'm a terrible reader," Cher said in 1985. "I don't write letters. Numbers and I have absolutely no relationship. I can dial a phone OK, as long as it's not long-distance. I write the first letter of the word, and my mind races to the last letter. I see words and jumble them together. I see great billboards, billboards no one has ever invented."

9. Jay Leno
The former host of "The Tonight Show" attributed the drive and perseverance he needed to succeed in comedy to his dyslexia. Leno, who received poor grades throughout elementary school, has said that one of his favorite career moments was calling up his fifth-grade teacher, Mr. Simon, 40 years after getting a C- on a paper about astronaut John Glenn and asking him to watch him interview Glenn.

"I had Glenn sign a thing for Mr. Simon and I got my paper upgraded from a C- to an A," said Leno, who received a B.A. in speech therapy from Emerson University.

10. Agatha Christie
A number of accomplished writers are believed to have had dyslexia, including Hans Christian Anderson, Lewis Carroll, W.B. Yeats, and Christie, the British mystery author and playwright.

"I, myself, was always recognized...as the 'slow one' in the family," Christie reportedly once said. "It was quite true, and I knew it and accepted it. Writing and spelling were always terribly difficult for me. My letters were without originality. I was...an extraordinarily bad speller and have remained so until this day."

11. Charles Schwab
Charles Schwab prefers oral communication to the written word, which is perhaps one of the reasons his firm's marketing campaign suggests that you "Talk to Chuck" rather than write to him.

Schwab, who wasn't officially diagnosed with dyslexia until he was 40, graduated with a degree in economics from Stanford in 1959.

"The first two years [at Stanford] I struggled because there were so many subjects," said Schwab, who read the comic-book versions of classic books to get by.

"I flunked English twice. They just passed me through the third time. I got an F in French. I had a tough enough time with the first language. When I came out of public high school I thought I could charm my teachers. I found out in college I couldn't."

Schwab persevered and, in 1971, founded the brokerage firm that still bears his name.