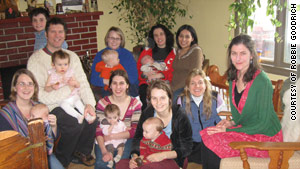 Robbie Goodrich, at left holding daughter Julia, with some of the moms who have nursed Moses, in center back.

As the newborn breathed in life, his mother, Susan Goodrich, began to die. Less than 12 hours after having her son, the 46-year-old mother of four was gone. The cause was a rare amniotic fluid embolism.

It was January 2009, and shell-shocked widower Robbie Goodrich was forced to immediately think of the baby's most basic need: milk.

For $5 an ounce, he could have purchased frozen donor breast milk, the kind of sustenance he knew his wife wanted for the boy. There was talk of tracking down a wet nurse. A friend left a message offering to breast-feed the newborn herself.

What evolved in the coming days still touches Goodrich. More than 20 mothers in Marquette, a city of 20,000 in the Upper Peninsula of Michigan, volunteered to nurse baby Moses.

All these months later, they're still at it.

"It's been such an incredible outpouring of community love for this child of mine," said Goodrich, a 44-year-old history professor at Northern Michigan University, where his late wife worked, too, teaching Spanish and Portuguese. "This has certainly stretched the parameters of what is public. I've had to open the door to complete strangers, inviting them into the most private, intimate part of my life."

Carrie Fiocchi, 29, was first to breast-feed Moses. She'd received a call from a nurse midwife who belonged to her Unitarian Universalist church.

When she heard what had happened to the Goodrich family, both she and her husband, with whom she immediately shared the story, fell apart. They were first-time parents to a 6-week-old girl.

They'd realize later that they had met Robbie years before. But in that moment, they didn't hesitate to help a stranger. The next morning, Fiocchi walked into Goodrich's home, where grieving family members had gathered in preparation for Susan's funeral, and took Moses into her arms.

"It was awkward and very sad and really wonderful at the same time," said Fiocchi, who has nursed Moses at 9 a.m. every day since then, with daughter Siri in tow.

Her husband, Matt, has developed a friendship with Goodrich and tags along with his wife and daughter at least once a week. He added, "Not being able to do anything myself, feeling kind of impotent, for me it was a matter of wanting to help and feeling privileged to be involved in any way."

"Ever since I became a mother, I've felt a connection with other mothers," said Fillmore, who has three children. "I was nervous. It was very emotional. I didn't know what to expect. But I felt like I needed to do this for Susan, even though I didn't know her."

A handful of mothers did know Susan and loved her for her brilliance, wit and passionate spirit.

A former student of Susan's from a decade earlier, Karla Niemi, 30, said that helping has brought her a sense of peace. And a former student of Robbie's who then became a close friend of the couple's, Sarah McDougall, 28, said that nursing Moses "gave me a way to be there for her and her family in a way I wouldn't have known how to do otherwise."

I didn't know what to expect. But I felt like I needed to do this for Susan, even though I didn't know her.
--Kyra Fillmore
RELATED TOPICS

It turned out that finding volunteers was the easy part, said Nicoletta Fraire, 35, who considered Susan her closest friend in Marquette and organized the effort. And they'd checked with specialists to know that what they were doing was safe. The difficult part, Fraire said, was working out logistics, especially in the beginning.

Initially, there were seven women a day to juggle. Some of the moms had easy-to-remember set schedules, others had more staggered assignments, and then there were those on call. Many could travel to Moses, but some needed the baby to come to them. And donations for night feedings had to be gathered.

Over the months, some women moved away, weaned their own children or became pregnant. New eager-to-help moms cropped up. Toss in occasional sicknesses and vacations, and the feedings -- which the group set out to continue for at least a year -- became a carefully orchestrated dance.

A white board mapping out the choreographed schedule still stands in Goodrich's dining room.

But making sure Moses was cared for, although complicated, was something Fraire wanted -- even needed -- to do.

"I didn't see it as a hard job but mostly as something that's helped me fill the void," she said. "I did it for Susan. I know she would have done it for me."

Not only have these women helped Moses, the steady flow of company -- which often includes kids and husbands -- has nurtured Goodrich, too. It has been a constant in his life and his home, where he's also raising Julia, his and Susan's 2½ -year-old daughter. Two older kids from Susan's first marriage live nearby with their biological father.

"I don't know if you can make this year any easier," said Goodrich, who is emotionally still muddling through. "But I have people there to share it with me. And you can imagine, they're compassionate, empathetic people."

Just as these moms have cuddled and nourished Moses, their own children feel embraced in the Goodrich home and often beeline to where the snacks are stored. Husbands read to Julia while their wives nurse the baby, and Robbie bonds with families who've become an extension of his own.

Mothers who've stopped breast-feeding still check in and come by for regular visits. The group stays in touch on Facebook, by phone and over shared meals and walks. Friendships, outside the Goodrich household, have been formed. They all gathered to celebrate when Moses ate his first solids.

"It's a valuable gift for everyone involved," said Tina Taylor, 39, who prolonged the nursing of her own youngest child so she could continue feeding Moses. "It's taught us the importance of family, community and sharing."

Taylor and the more than two dozen other women who've nursed Moses know they cannot replace what was lost hours after he was born. But the father they've reached out to help says they've given his son something he could have never provided on his own.

"He's a healthy, happy, well-adjusted boy," he said, "who has always known a mother's love."