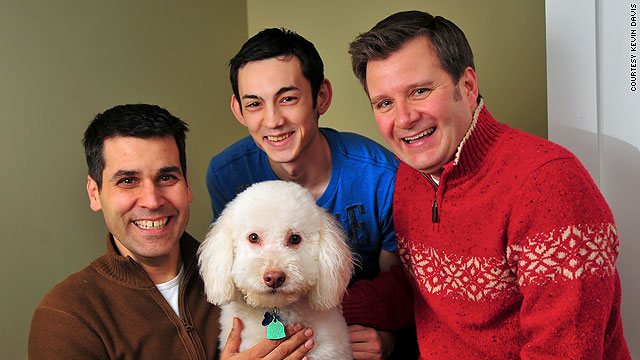 Tim Ferraro, left, and Mark Hauck adopted their son, center, when he was 23. He has changed his name to Sam Hauck-Ferraro.
STORY HIGHLIGHTS
RELATED TOPICS

Like the 20,000 foster children who "age out' of the system each year, John left California's foster care system six years ago believing he had missed his chance to be part of a family.

But then something unexpected happened.

In spring of 2006, he met Mark Hauck and his partner, Tim Ferraro, a couple in their 40s. They were living next door to his former high school nurse, who had taken John, 21, into her home temporarily.

John was curious about the couple, particularly Mark who worked with high school drama programs. John enjoyed writing scripts in his spare time.

Maybe he could get some advice from Mark, he thought.

Growing up, John took care of himself.

By the age of 5, John says he fixed his own meals while his mother slept through the day. He began caring for his newborn sister, Ashley, shortly after his seventh birthday. The process became routine: Preparing the formula, pouring the milk into the bottle and feeding her tiny mouth. He changed the baby's diapers, too.

He describes his mother as impulsive and unable to hold a steady job. His biological father disappeared before his birth.

Their inquiry included John's background file, a thick stack of social worker reports, police documents and photographs. Authorities concluded John was a victim of neglect and physical and sexual abuse. When he was 16 months old, authorities reported bruises on his face. He had bite marks on his body when he was about 2 years old.

John recalls his goodbye with his mother. He was 7 when authorities whisked him away.

"I remember feeling freedom," he said. "I remember walking out. I remember my mom saying not to go, and I returned to her and said 'Sorry, I have to.' "

His mother's parental rights were later terminated, and John stopped talking to her in 2004.

By the time John reached high school in the foster care system, chances for adoption were slim. Only 7 percent of foster children 14 and older find a permanent home, according to a 2008 Department of Health and Human Services report. The state had already labeled John with attention deficit disorder, depression and behavioral issues.

His social worker wrote in his file that he was unadoptable.

Shortly after they met in the spring of 2006, Tim Ferraro offered John a job at his remodeling company. Tim knew John needed the cash since he was then renting his own apartment.

One afternoon when John's shift ended, Tim and Mark invited John into their home for dinner.

John ate as they talked about politics and religion. "I channeled my paternal Sicilian grandmother in me," Tim joked. "And I just kept asking him, 'Are you hungry?' "

Their friendship blossomed, and John became a frequent guest. Sometimes after dinner, they played board games or watched movies. John showed them his scripts and music.

To help the young man out, Tim and Mark donated extra groceries to John when they could. They hired him to complete odd jobs around the house.

The couple helped him with "adult tasks" that John hadn't learned before such as tracking finances, résumé writing and answering job interview questions.

When John fell ill, they loaned him money for doctor visits. They knew the young man struggled with depression so they found a counselor for him.

At the same time John became part of their life, the couple was looking to expand their family.

Mark Hauck and Tim Ferraro had always considered adoption during their 20-year relationship. Career goals and imperfect timing derailed them but they were determined to become parents.

The couple got serious about adopting in the summer of 2008. They completed an adoption training program required by the state of Minnesota.

They had preferred to adopt a child, but during one training session, Mark and Tim listened to the teens and young adults share their adoption stories. The teens talked about how a permanent home gave them the support and confidence to succeed.

At that moment, they realized John needed parents too.

Already friends with John for two years, they knew he was struggling. John was fired from his food service job in May 2008. His credit card debt grew to $50,000. John became anxious and depressed.

"He was really trying hard against odds that were stacked completely against him because he was unprepared to be on his own," Mark said.

Because John was an adult, the couple knew the adoption process would be easier than adopting a child, a process saddled by home studies and heavy paperwork. Tim and Mark also knew some agencies would rule them out for adoption because of their age and sexual orientation.

That is the question that confronted Mark and Tim after they decided to propose the adoption to John. Adult adoption in the U.S. is rare -- fewer than 200 adult adoptions for individuals between the ages of 18 and 20 in 2008, government studies report.

For weeks, the couple mulled over their decision to adopt John. They knew if they offered to become his parents, the act, in their minds, would be unchangeable.

Close friends asked the tough questions: Could they financially support John? What would happen if John got into trouble?

Not used to commitment

John arrived at Mark and Tim's home for dinner. Their casual Friday night consisted of pizzas and Cokes, followed by several games of Rummy.

The soda shot out of John's nose when Mark asked the question. He thought that maybe he hadn't heard Mark correctly.

But John didn't have an answer. He asked for a few days to think about his decision. At first, John grew angry when he thought about their offer to adopt him.

"I don't think I was used to the level of commitment they were offering," John said. "An adoption can't end."

The permanency Mark and Tim promised was a striking contrast from his past. When John stirred trouble, the state moved him to another foster home. When he acted violently, the state punished him by sending him to residential treatment.

Several days later, John appeared at Mark and Tim's door with his belongings. John decided he was tired of spending Christmas and birthdays alone. He realized, even as an adult, that he still needed parents to provide him advice -- and compassion. He wanted a family of his own.

This month, Mark and Tim are celebrating their one-year anniversary with their 24-year-old son.

The adult adoption was finalized by a judge in December 2008, a relatively smooth process compared to adopting a child. The three adults signed the adoption paperwork in front of a judge.

"To us, Sam was simply our son," Mark said. "It didn't matter that we didn't bring him home in a blanket."

That month, John legally changed his name to Sam Ferraro-Hauck. The change would mark a fresh start.

Sam's adoption story represents a shift in the adoption world over the last decade. Adopting older teens and young adults has become more popular, said Adam Pertman, executive director of the Evan B. Donaldson Adoption Institute. The number of individuals between the ages of 14 and 20 adopted rose from about 2,000 in 1998 cases to more than 4,200 in 2000, according to the Department of Health and Human Services.

Experts say the federal government's passage of the Fostering Connections to Success and Increasing Adoptions Act of 2008 has given funding incentives to states that promote older adoptions. The act extends foster care payment cutoff age from 18 to 21 years of age.

The Minnesota nonprofit Ampersand Families, where Mark now works, is one example of a growing number of nonprofits that help older teens and young adults secure permanent homes. This Christmas, the agency matched a 13-year-old foster child with a Minnesota family.