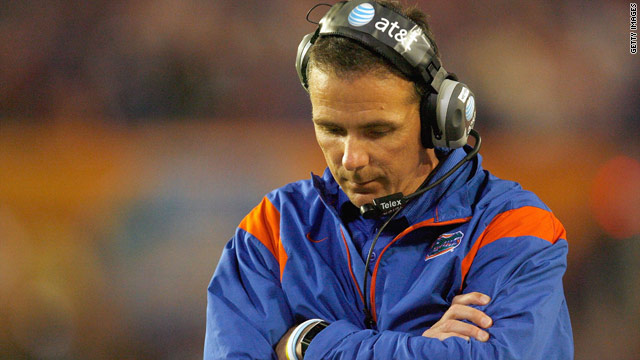 (CNN) -- When University of Florida head football Coach Urban Meyer announced he was retiring to save his health, an old rival understood.

"Certainly, if there are health issues involved it makes it nearly impossible to do it," said former University of Tennessee Coach Phil Fulmer. "In this job, there's always something else that needs to be done. There's not a time of the year you can say, 'OK, we're going to slow down here.' "

And a day later, when Meyer backtracked and said he'd just take a leave of absence instead, a former colleague wasn't surprised.

"It's almost like a drug," said Bob Davie, the former head coach at Notre Dame who worked alongside Meyer for five years there. "The highs are tremendously high and the lows are tremendously low. You get addicted to it."

Meyer's announcement cast a light on the high-pressure world of coaching, particularly at the nation's major college programs -- multi-million-dollar operations where, experts say, growing demands both on and off of the field can take a toll on the health of the men who run them.

"You're essentially the CEO of a major corporation," said Todd Bell, media director for the American Football Coaches Association. "You're the spokesman, the chief fundraiser -- there's an awful lot of non-football work that goes into that type of position."

Five years into his tenure at Florida, Meyer is among a small handful of elite coaches in collegiate football. His teams have won two National Championships and were undefeated and considered favorites to win a third before losing the Southeastern Conference championship game to Alabama.

But on Saturday, he stunned the sports world by announcing he'd step down. Meyer had been rushed to a hospital in early December with chest pains and Saturday said he'd suffered chest pain for four years.

Sunday, he created more wiggle room for himself, saying he'd instead decided to take an indefinite leave of absence and plans to be on the sideline Friday, when Florida takes on Cincinnati in the Sugar Bowl.

Meyer also acknowledged a benign cyst on his brain that can lead to severe migraines when enflamed by stress.

And few professions offer the toxic stew of stressors that coaching at football's highest levels can.

Elite coaches can demand millions of dollars a year. But with that comes what former coaches call a 24-hour-a-day, 365-day-a-year job that includes recruiting, fundraising, public relations and managing staffs that can number in the hundreds.

The ones who are most successful tend to be driven, often are micro-managers and demand more of themselves than may be healthy.

"That kind of cumulative effect of all that is what gets you."

"One of the things that I think was really important was to try to keep balance. [But] that was very hard to do when you're working 18 hours a day for most of the year.
--Former Tennessee Coach Phil Fulmer

Then there is the constant pressure to perform -- by rabid fan bases just as likely to skewer you on the Internet when you lose as cheer your name when you win. The universities themselves also want quick results for their money.

Fulmer, whose 17 seasons at the helm in Tennessee included a national championship in 1998, was nevertheless forced to step down in 2008 after a 5-7 season -- only the second losing year of his tenure.

Still, Fulmer -- who has said he'd like to coach again -- counts himself lucky. He spent 35 years in coaching, 30 of them with Tennessee. He said the support of his family and faith were important in keeping him grounded.

"One of the things that I think was really important was to try to keep balance," said Fulmer, currently a football analyst for CBS. "[But] that was very hard to do when you're working 18 hours a day for most of the year.

"I was probably the worst at taking my own advice."

That kind of stress is a well-known contributor to health conditions ranging from loss of sleep to heart attacks.

"It's really a constellation of things that can go together," he said. Patterson said he's treated coaches in the past who, like athletes, are sometimes reluctant to admit they're not well.

"I deal with the tough-guy phenomenon constantly," he said. "What I tell people is that they are role models. They've got not just their players, but fans and all sorts of people who care about them.

"If they engage in denial, they're telling everybody else that that's OK."

He called it encouraging that Meyer took action to address his health before an emergency.

Bell, from the coaches association, said he believes more coaches today are staying in shape and mindful of what stress can do. Some, he said, have instituted policies requiring all team employees to leave the office by 5 p.m. at least one day a week.

He said his group has advocated for other measures too -- like the NCAA's current "dark periods" during which teams are not allowed to be on the road recruiting for the following season.

Davie, meanwhile, admits that "every year, those demons pop up that say, 'Hey man, you need to get back in this arena.' "

At the same time, he acknowledges the toll the profession he loves can take.

"It's a vicious cycle," said Davie. "All the things that make you successful speed your downfall. The things we applaud about you are what we say you need to be careful of."