10 things to say to keep the peace

(Real Simple) -- So many big arguments begin with small comments. How many times have you started a conversation on friendly terms, then wound up in some kind of dispute that you didn't anticipate? 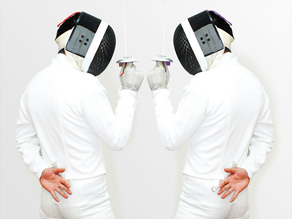 Know when to table a conversation. Sometimes you just have to say, "Let's wait until we have more information."

In my work as a family, divorce, and small-claims mediator, I've seen countless offhand remarks start a fight or add fuel to an existing fire. And I have found myself in plenty of situations where I've wanted to give someone (my husband, a colleague) what I thought was helpful advice only to inadvertently offend him or her.

The holidays, with all their extended-family gatherings, can be a verbal minefield. You're either dodging nosy questions from some tactless relative over dinner ("Still dieting then?") or taking out the stress of all that extra cooking and shopping on those dearest to you ("Do I have to do everything around here?").

It doesn't have to be that bad. Use these 10 go-to phrases to defuse potentially volatile conversations and help you get through the coming years -- in harmony.

1. "Thank you for your opinion. I'll think about it." When you receive unsolicited advice at a family gathering, such as Aunt Sylvia's suggestion that you change your hairstyle, just smile and respond with this casual conversation terminator. Real Simple: Table manners refresher course

If you're rudely asked a question like "Are you still single?" don't reply with a lengthy excuse. Say, "Yes, and I'll let you know if anything changes." The goal is to be polite and end the conversation. There is no need to be defensive or rude.

2. "Is this a good time for you?" Whenever I want my husband's full attention for a conversation and I don't want to compete with a football game on TV, I ask this simple question. If he gives me a green light by saying yes (and turning off the game), I proceed.

If he says no, I ask, "When would be a better time?" We then agree on another time and a fight is avoided. Consider using this line at work, too. Your boss and coworkers will appreciate it.

3. "Would you like my thoughts?" One of the biggest complaints kids have about parents is that they constantly issue orders and judgments. Sometimes this is a parent's job. But if you are often confronted with an angry response ("Who made you the authority?" or "It's none of your business"), you might benefit from dialing back.

Ask your child if she wants to hear what you have to say. If she says yes, it means she is ready to listen. If she says no, then button your lip. This works for adult family members, too.

4. "Why don't we get the facts?" Some people who come to mediation tend to argue about anything and everything, including things that can be easily resolved. If you find yourself in a dispute with your brother about the price of a car or the name of the restaurant you went to over the holidays last year, state this one-liner, then look up prices online, call a store, or drive by the restaurant -- not so one of you can say, "I told you so," but so you can move on from the discussion before it spirals into a fight.

5. "I need your help. Can you please...?" People often ask me what they can say to family members or coworkers who don't assume their share of responsibility. Here's my simple tip: Rather than accusing the person of being lazy or inconsiderate, ask her for what you want and be specific. "Since we both drink coffee, how about if I make the pot and you clean it, or vice versa?" People are not mind readers.

6. "Let's wait on this until we have more information." Know when to table a discussion. One couple came to me with a dispute that had turned into a huge problem for them: They were constantly arguing over whether they should stay in their city apartment or move to a house in the suburbs. The issue wasn't which choice they should make (they had already agreed they wouldn't move for three years, or until their oldest child reached school age); it was that they were having a premature argument.

At times like these, it's important to remind yourself and your conversation partner that it's too early to discuss the issue. Preferences will change over time, as will facts, such as home prices. Real Simple: Easy ways to exit awkward situations

7. "What did you mean by that?" Sometimes asking the right question is all it takes to avoid an argument. We all make assumptions about other people's intentions. Asked in a genuinely interested (and not passive-aggressive) way, this question allows your conversation partner to explain himself before you jump to conclusions. Only then should you offer your response.

8. "I don't like that, so why don't we do this instead?" This is how to complain with impact. Rather than nagging your mate about a problem, focus on finding a solution for the future. For example, instead of moaning about buying all the holiday gifts, suggest that he shop for the men in the family and you buy for the women -- or split some other duties.

9. "I'm sorry you're upset." When you find yourself frustrated with a friend or a close family member who didn't take your advice, you desperately want to say something like "I told you so" or "That was a dumb thing to do." Don't. Dishing out criticism won't change a thing. A compassionate response will help you both move forward.

10. "Let me get back to you." Everyone needs a prepared comment to delay a response when he or she is put on the spot. For example, a cousin suggests you prepare a main course for her potluck Christmas party for 20 people or the president of the PTA picks you to head a committee for a year.

Keep this line handy at all times, especially during the holiday season. If you don't want the person to feel as if she is being dismissed, give her a time when she can expect a response: "Let me get back to you by tomorrow afternoon." And then make sure that you do.

All About Relationships • Etiquette and Manners