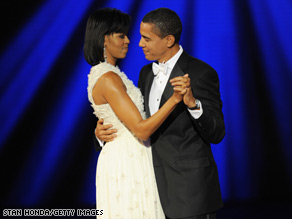 The first lady accessorized with diamond chandelier earrings, a white gold and diamond ring and a stack of diamond bangles by jeweler Loree Rodkin.

The president summed up his wife's look best before their first dance -- to Beyoncé's rendition of "At Last" -- when he said, "First of all, how good-looking is my wife?"

Michelle Obama has worn Wu once before, during an interview with Barbara Walters. Wu, one of America's leading young designers, debuted his first collection in February 2006 and has since earned accolades such as Fashion Group International's Rising Star Award.

Obama was likely introduced to the designer in one of her favorite Chicago, Illinois, boutiques, Ikram.

The new first lady has made a conscious effort to support young, diverse talent in the fashion community.

In choosing Wu, who is originally from Taiwan, Obama continues a tradition of wearing American designers who hail from other countries.

They include Cuban-American designers Isabel Toledo, who designed her yellow lace inauguration ensemble; Narciso Rodriguez, designer of the red and black dress she wore on election night; and designer Thakoon Panichgul, originally from Thailand, who designed the floral dress she wore the evening her husband accepted the Democratic nomination for president.

Michelle Obama's style statement is one meant to inspire ethnic and class diversity in the world of fashion.

Aside from being a socially conscious purveyor of style, Obama also sends a clear message of hope and promise by choosing colorful, reasonably priced pieces.

Watch the Obamas enjoy the night »

She prefers bright, cheerful shades such as yellow, electric blue, red and purple, and has been seen on multiple occasions in head-to-toe looks from moderately priced American retailer J.Crew. In fact, daughters Malia and Sasha braved Tuesday's chilly weather in coats from the brand's children's collection.

Michelle Obama was first seen in J.Crew during a visit to the "Tonight Show" with Jay Leno on October 27.

The first lady also said she had a penchant for Internet shopping, saying, "When you don't have time, you gotta click!"

Obama wore J.Crew again at the Kids' Inaugural Concert on Monday. She gave the colorful ensemble a luxe spin with dangling green sapphire earrings from Loree Rodkin and a Deco-inspired belt buckle.

"People tend to think classic looks are synonymous with boring, but they're not," he explains. "Michelle Obama has a specific style that works for her. She has a lady-like approach to style that is elegant and inspiring.

"What we'll see as a result is this idea of looking put-together and sophisticated, as opposed to being daring or flamboyant. It's all about looking polished, like you know what you're doing."

All About Michelle Obama • Fashion and Style • Fashion Criticism