Young couple moves in with her ex-husband 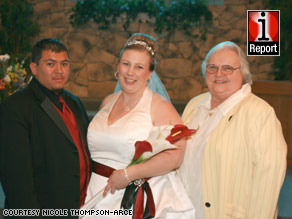 Nicole Thompson-Arce poses on her wedding day with her husband, Mathew Arce, and her ex-mother-in-law.

(CNN) -- Struggling to make ends meet, trying to dig themselves out of debt, Nicole Thompson-Arce and her husband have moved in with her ex-husband.

It's the kind of situation that has left cable guys howling.

"They'd never heard anything like this," Thompson-Arce, 28, remembered with a laugh. "And they're in people's homes everyday."

When she and Craig Thompson, 42, were going through a divorce in 2005, this was not a deal either of them could have imagined striking. It was a messy divorce, the kind involving a custody dispute. But once they ironed out that battle, agreeing to joint custody, Thompson-Arce said they were able to move on and forward. iReport: Read Thompson-Arce's post

By the time she married Mathew Arce last July, she said she and her ex were friends. In fact, they were so close that his mother -- meaning Thompson-Arce's ex-mother-in-law -- was in (not just at) the second wedding ceremony.

Soon after the Florida wedding, the new lovebirds flew into a financial mess. She had left a job, and as soon as she found another (a temp position), her 22-year-old husband was fired from his higher-paying gig. iReport.com: Job hunt stories

They fell behind in rent. The bills stacked up. The credit card debt grew. iReport.com: What are you cutting from budget?

A couple months later, Arce, landed a temporary Wal-Mart cashier position, which has since turned into a full-time job. But finances remained shaky and digging themselves out of debt seemed insurmountable. Tell us how you're surviving in this economy

In walked the ex with an offer, just in time for Christmas. Thompson, an 18-year bakery employee at Wal-Mart, lives in a three-bedroom, one-bath home.

"I knew they were having money problems, so I just asked them to move in," he said. "I figured I'd get to see my girls, my daughters, more often. And Nicole said yes right away."

Besides the economic savings, the benefits are many.

No longer do they have to shuttle Victoria, 7, and Caitlyn, 6, between two households. As a team, they can parent and be on the same page. Finding a baby sitter is never a problem. They take turns making meals, which they all share.

Thompson and Arce, who are 20 years apart -- "I had to get the whole spectrum going there," Thompson-Arce joked -- have become the best of friends, and share a similar sense of humor. They have tackled home improvement projects, run around together on days they both have off and often hang out at the kitchen table building plastic models.

"We just clicked," Thompson said. "When I tell people, 'I'm living with my ex-wife and her husband,' I get some really strange looks. ...It's different. It's unusual, but it works."

The transition has been smooth and great for the kids, Thompson-Arce said. And for their benefit, irrespective of finances, she thinks it's a living situation they'll stick with for at least five to 10 years. It has, however, taken a little time for the little ones to get the story straight.

Seven-year-old Victoria went back to school after winter break -- and after the whole team had blended under one roof -- and started telling people this: " 'My mommy has two husbands,'" Thompson-Arce remembered. "I was like, 'No, honey, don't tell them that!'"

What she and both men hope the girls are learning is that divorced parents can work together and be friends.

"There are so many families that go through divorce and can never let it go," she said. "I'm thankful, and hopefully our situation can help people rethink things because if they have kids, it's in their best interest to get along."

One might wonder whether the couple, who've been married for less than a year, get enough time alone together, given where they're living. Thompson-Arce points out that her ex works a shift that sends him to bed at 7 p.m., so the evenings -- after the kids are asleep -- are for her and her husband to share.

"When they do have a romantic evening, I don't hear them, so we're not going there," Thompson quipped. "There's a bathroom between our two bedrooms."

The ex-husband hasn't dated since the divorce. He said it's because he's been focused on work and taking care of the kids. Thompson-Arce, however, said that she and her husband are forever trying to get Thompson on the dating scene and want him to meet someone special.

Special, and understanding, she would most definitely need to be.

"He'd have to find a very open-minded woman because we don't plan on going anywhere anytime soon," Thompson-Arce said.