Hunting for the secrets of a happy marriage

"Happy families are all alike; every unhappy family is unhappy in its own way" -- Leo Tolstoy, "Anna Karenina" 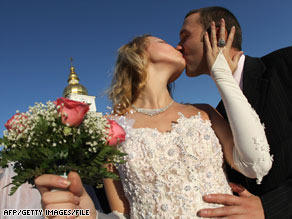 Most couples know wedding day bliss doesn't last, but there are ways to keep a relationship from eroding.

(CNN) -- No one can truly know what goes on inside a marriage except the two people involved, but researchers are getting increasingly good glimpses at what makes couples tick, how relationships are stressed and what factors can keep the spark alive.

The goal: To find out what keeps love alive and couples together.

Putting marriage under a microscope has resulted in new long-term studies that are showing better than ever how a birth or simple boredom can drain a union.

More surprisingly, old photographs might help predict your chances of getting a divorce, new research suggests.

All of the findings can help couples learn lessons about their relationships and their spouses, said Nadine Kaslow, a professor at Emory University School of Medicine who specializes in couples and families and also serves as chief psychologist at Grady Health System in Atlanta, Georgia.

To have children or not?

Movies often portray the birth of a child as a joyous event that solidifies a couple's union, but the arrival of the first baby puts a sudden, important strain on a marriage, according to a study published recently in the Journal of Personality and Social Psychology.

Researchers followed more than 200 couples for eight years after their wedding -- the longest study yet looking at the impact of a child on marriage.

About 90 percent of mothers and fathers saw at least some decreases in relationship satisfaction after they became parents, said Brian Doss, assistant psychology professor at Texas A&M University and one of the authors of the study.

Spouses who were the most romantic before the birth of their child found the transition to parenthood the most difficult.

"Couples who were really enjoying a lot of the quality time they were spending before birth had a lot more to lose," Doss said.

"Whereas couples who just naturally over time had adopted more of a friendship relationship, kind of a co-partner relationship, perhaps didn't miss or didn't notice the loss of that connection as much."

Staying childless wasn't the secret to marital bliss, however. Couples in the study who didn't have children still became less happy with their marriage, just much more gradually than those who had children.

Couples considering starting a family may find the results alarming, but psychologists say they serve as a reminder that a relationship needs to be nurtured.

"People tend to be less dedicated to their relationship and not prioritize being with each other," Kaslow said. "This deterioration seems to be pretty sudden right after the birth, so that's a particularly crucial time to be mindful of it."

Simple steps can go a long way to keeping a relationship strong. Couples can start by setting aside some private time every day, even if it's just 15 minutes, and scheduling a weekly date, Kaslow advised.

How to fight boredom

Most people think that problems and tension spell trouble in a marriage, but a new study has found boredom is also a powerful force in eroding marital bliss.

Couples who reported being in a rut seven years into their marriage were significantly less satisfied with their relationship when researchers checked back with them nine years later, according to a study to be published next month in Psychological Science.

"For boredom to have such long-term implications I think is very significant," said co-author Terri Orbuch, a research professor at the University of Michigan and a professor of sociology at Oakland University.

But closeness over time can eliminate that effect, the study also found.

How can couples get close if they're feeling bored? Sharing novel activities with each other -- like taking a cooking class or learning to ski -- is the key, said Orbuch, who has been following a group of married couples for 22 years and is writing a book about their marriage strategies.

Some boredom is inevitable in a marriage, but it is absolutely possible for a couple to reignite a relationship, Kaslow agreed.

Her parents have just started taking classes about opera together and have assembled a "bucket list" of all the places in the world they still haven't been to that they would like to visit.

"They want to do more exciting things even at their age to nurture the relationship. I think that's what healthy long-term relationships do," Kaslow said.

What do photos reveal?

Surprisingly, a possible clue about whether you stay married or get divorced may be contained in your photo album.

Researchers analyzed photos taken in childhood or young adulthood from hundreds of people and rated their expressions on a "smile intensity score."

The less intensely the subjects smiled, the more likely they would be divorced later in life, while the biggest smilers had lower divorce rates, according to a study published online this month by the journal Motivation and Emotion.

Scientists don't know what accounts for the link, but say a smile may indicate higher levels of positive emotions and signal other traits, said co-author Matt Hertenstein, associate professor of psychology at DePauw University and head of the school's Touch and Emotion Lab.

"People who smile a lot may attract happier people and maybe happier marriage partners," Hertenstein said. "It may be that people who smile in response to a photographer are more obedient people and obedience may help in a marriage. I really don't know the explanation."

Before you run to check your spouse's yearbook photo, keep in mind one picture can't tell the whole story, Kaslow said.

"I think the issue really is both getting a sense of a whole set of pictures and also the level of positivity that [people] bring into life and relationships," she said.

All About Family • Marriage • Psychology