Why I didn't want a girl

(Parenting.com) -- In an elevator, in line at the grocery store, waiting for the bus, it always goes like this: Strangers' eyes zero in on my belly first. Then they dart furtively to my face, as if to make sure I'm not a mutant, just visibly pregnant. 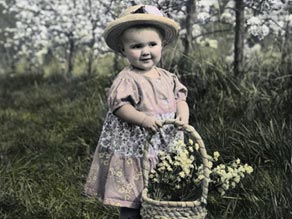 Mom of boys worried while pregnant with girl that she wouldn't be able to handle a feminine child.

After this, they ask, "Is this your first?"

And for the kicker, they unfailingly give me a sideways grin, and say: "Going for your girl?"

"Nooo, just going for a baby," I reply, gritting my teeth a little. "Another boy would be fine with us."

I know these people are just making conversation. But this constant assumption leaves me a little offended. What's wrong with boys? Why wouldn't I want another one? It bothers me that people assume I feel incomplete without a daughter, let alone that it's my motivation for being pregnant with a third child in the first place. Parenting.com: Dirty little secrets moms keep

One woman actually said to me, "I had two boys first also. And then I had my girl. Thank God."

To these people, I say, "I actually hope it's another boy. I like boys better."

I do this partially in defense of the two wonderful sons I have. But it's the truth. I love what I have, and I have what I love: boys. I understand them. I understand the clothes, the toys, and the Matchbox-car skids on my wallpaper.

Not that having two boys is easy -- their physical interaction can be, shall we say, overwhelming. But I love even that, because when I say I am the mother of two boys less than two years apart, I get a respectful nod or even a big thumbs-up for having that much testosterone in my daily life.

The night we found out I was pregnant again, my husband, David, said, "Odds are it's another boy. How do you feel about that?"

I thought for a moment, and answered honestly, "I feel good about that." He patted my hand. "That's how I feel, too," he replied, and we both drifted off to sleep. It was more than good; we were relieved.

Several weeks later, I had an amnio, but we told the doctor and technicians that we wanted the baby's sex to be a secret. Keeping it a surprise has always been more fun, and there seemed no reason to spoil the anticipation. Our doctor agreed to keep mum.

Then, two weeks later, I called to schedule my next appointment. "Hi, Amy! Your amnio looked great, and it's a girl! How nice for you," the receptionist blurted.

For a moment I didn't know what she was talking about. Then I realized what she had just revealed and I almost dropped the phone. "Wha-what? " I said. The receptionist heard the bewilderment in my voice. "You knew, right?" she said. "The doctor told me you knew."

I sat there in a daze. This child I was just starting to feel stir inside me was a girl? I waited for the excitement to wash over me. It didn't come. Not only was I not thrilled -- I was disappointed. I'm still not sure whether I was more bummed by how I found out or what I found out. Either way, I was shaken. Parenting.com: Will you be a good mother? How to read the signs

Even before I had sons, I worried about having a daughter. I could handle boys, with their cut-and-dried needs, but girls were so much more complicated. Girls have elaborate hairstyling requirements. They whine and mope, manipulate and triangulate. How was I going to deal with that?

I was ashamed of feeling apprehension about my unborn daughter. But I couldn't shake it. What if I weren't able to embrace what she loves? What if I couldn't stomach daily viewings of "The Little Mermaid?"

My sons sneer at all things princess, and so do I. We love to pore over the Birthday Express catalog so the boys can plan the themes of their parties through 2013. My role in this is to gasp, "Oh, I think you should have a pink-poodle party!" "YUCK!! That's for GIRLS!!" they shriek, and I laugh along with them. What will I do when I have someone who wants a pink-poodle party?

I know not all girls are like this -- sugar and spice and Hannah Montana. My own niece provides a compelling dirt-under-her-fingernails counter example. Plus, I can choose not to expose my daughter to the pink princess world in the first place.

But having already had two children, I've learned that you can't control their hardwiring. If she wants to be a princess, that's what she'll be. I don't allow toy weapons in the house -- which just means that my boys blithely improvise sippy-cup shootouts and remote-control duels to the death.

I also worry that girls have it harder -- whether they're tomboys or wear tutus. I fear I won't know how to protect my child from a world that may often tell her that she's not good enough as she is. That, in order to get ahead, she's going to have to deny some part of herself. Having a daughter means there's so much more, as a mother, that I can do wrong. Parenting.com: The things that moms feel guiltiest about

I was hoping that my husband's reaction to the news would make me feel better about all of this. When I got him alone, I told him that the receptionist had screwed up, and that I knew. He hid his face in his hands. "Well, don't tell me!" he said. "I don't want to know!"

That was four months ago. I've got three weeks left, and two of my closest friends know I'm having a girl, but my husband still doesn't.

"Will you be happy either way?" I ask David. "Of course, honey," he says, and I can tell by his voice he thinks I'm carrying the third boy he wants more anyway. "Three sons would be amazing."

So it's up to me to psych myself up for this one's arrival. I figured one distinct advantage to knowing ahead of time that she was a girl was that she wouldn't have to wear yellow and green for the first six months like her mystery brothers had. I went shopping recently to stock up on girlie sleepers, Onesies, and Trumpette socks. This will get me excited, I thought. It's like going out to see department-store windows to get in the Christmas spirit.

But I was immediately overwhelmed. With boys, there are two racks to choose from. With girls, it's the rest of the store: a staggering array of ruffly, rosy frills.

I couldn't breathe. I grabbed a pink sweater and two pairs of pink socks, got out of there as quick as I could, and buried my purchases in the back of the guest closet.

One of my friends who knows the secret thinks a girl will be great for me. "You deserve a girl!" she said, after watching me separate my two fighting boys. "Just think, she'll be quiet. Calm. Easy." It's true: Even inside me, she's different. When my boys would kick, I'd press against their little feet, and they'd kick back, harder. This baby? If she kicks and I press back, she goes completely still.

So maybe she will be my little angel who will play with her dolls, peaceful and content. But is that what I want for her? If she is gentle, will she be eaten alive by the mean girls in sixth grade? Will I be powerless to protect her?

Her head is engaged, my ob told me yesterday. She can come any day. And when she does, I know my feelings will change. It's happened before.

The second time I saw two lines on my EPT, I had a barely 10-month-old underfoot, and my reaction was: Oh, crap! I'm not ready. My son isn't ready. This child will screw up my first by coming along too soon. And then he was born, and he is the apple of my eye. Happy, easy, loving. As generous with the hugs and kisses as his older brother is stingy. It nearly breaks my heart to watch him sleep.

I'm hoping that will happen again. Since I can't tell my secret to my husband or family, I've started telling strangers and basking in their excitement. Yesterday, a security guard asked if I knew what I was having. "I have two boys at home," I said. "This one's a girl."

She inhaled sharply, then smiled, ruefully: "I just had my third. All three boys. You are so lucky." "Thank you," I said, though I still don't really get it. I'm counting on all these people being right: that when I meet this daughter and look in her eyes, I will understand why everyone else so wanted this for me.

Amy Wilson created the off-Broadway hit "Mother Load," now on national tour. Her daughter, Maggie, is 16 months old, and Wilson "gets it" now, she really gets it. Read her blog and get show details at motherloadshow.com.