Your in-law problems -- how to fix them

(REAL SIMPLE) -- Here is some advice for keeping in-law relations sane and strife-free. 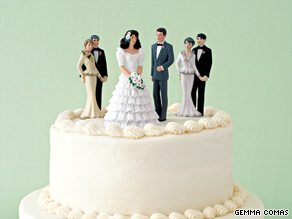 A bride and groom do not just unite with each other, they also become connected to their spouse's parents.

If they criticize your housekeeping skills

Address it directly. While you may be tempted to enlist your husband, in this case it's often better to respond to your mother-in-law directly, since your husband may not feel that this is a battle worth waging and thus may avoid the discussion altogether, says Terri Apter, Ph.D., a psychologist at the University of Cambridge, in England.

Be honest. If housekeeping isn't a priority for you, go ahead and tell her, say Liz Bluper and Renée Plastique, the pseudonymous authors of "Mothers-in-Law Do Everything Wrong: M.I.L.D.E.W." But if her complaints seem unsubstantiated or become an incessant refrain, there could be deeper issues at work.

"What seems like a small point may not be," Apter says. "She may not just be saying, 'There is too much dust here,' but implying that you're not the kind of woman you should be." Real Simple: What to say in awkward social situations

Before you tell her where she can stick her dust bunnies, though, keep in mind that she may be unaware of the problem. "People often don't realize that what they're doing is hurting someone," says Beverly Freid, the creator of Motherinlawstories.com, a support-group Web site that has 50,000 visitors each month.

Clue your mother-in-law in, Freid advises, by saying something like, "I truly appreciate your concern, but you might not realize that you're hurting my feelings when you make comments about the dusty bookshelves."

Asking when you'll have children

Acknowledge their excitement. While this is a very personal and potentially annoying question, your in-laws may only be asking because they're excited by the prospect. "Acknowledge their needs by saying, 'I know you want grandchildren,'" says Jeri Kadison, a marriage coach in New York City. They probably aren't asking in a judgmental way, and even if they are, you can turn it around by saying, "Don't worry -- you'll be the first to know." Real Simple: 10 things to say to keep the peace

They baby your husband

Figure out why it bothers you. Does your mother-in-law do things that suggest she still thinks of your husband as her little boy (buying him underwear, say, or telling him how to wear his hair)?

"Most in-law problems boil down to the intrusiveness of one person and the sensitivity of the other," says psychologist Pauline Wallin. "How does one person send a message, and how does the other receive it?"

While your mother-in-law's actions may well be inappropriate, examine why they bother you. Is it because you feel threatened? Discuss your feelings with your husband -- it's his job to tell his mother that he's old enough to manage his life. If her babying gets on your every last nerve, put yourself in her shoes.

"Empathy is an important part of any relationship," says psychologist Bob Murray. Maybe your mother-in-law is acting this way because she's worried about losing touch with her son. "When you can feel empathy for someone, you won't feel so threatened," says Wallin. Real Simple: Banishing life's little annoyances

They clash with your parents

Separate the sides. In this case, it may be best for you and your husband to talk to your own sets of parents separately. Tell them that you understand that they're not going to be best friends with the other couple but that it will make you and your husband happy if they can at least be civil.

When it comes to social settings, it may be better to keep them apart than to deal with the stress of potential bickering. Consider the size of the gathering: If it's a small holiday dinner, you might celebrate on two separate nights. Bigger parties should have enough people that both sets of parents can avoid each other.

But keep in mind that they are all adults, even if their behavior suggests otherwise. If it's an important event at which you'd like them to all be present -- your son's first birthday, say -- you can't, and shouldn't, take responsibility for them. And if you're given an ultimatum ("If they're coming, we're not"), simply reply, "We'll miss you."

Your husband's father upsets him

In situations where your husband and his father aren't talking at all, play diplomatic mediator. "Don't attack," says psychologist Pauline Wallin. Ask your father-in-law for permission to discuss it first: 'Would it be all right if I talked to you about something?' People are more apt to listen when you ask permission first."

If they give unsolicited child-care advice

Listen to what they have to say. If your in-laws always offer unsolicited advice on how to raise your children, "The best response is 'That's a good idea.' That way, you and your husband aren't committing," says Pauline Wallin, Ph.D., a psychologist in Camp Hill, Pennsylvania. "On the other hand, you shouldn't automatically reject advice just because it's from your in-laws." They may have a wealth of knowledge to offer (after all, they raised the man you love). Consider how the advice would sound if it came from your best friend.

You might also stave off trouble by asking for advice, even if you don't necessarily intend to follow it. Most likely, your in-laws just want to feel involved. In any case, "politely ask that when they offer advice, they express it as an opinion, not as criticism, which undermines the role of the parents," say Bob Murray, Ph.D., a psychologist, and Alicia Fortinberry, a psychotherapist, coauthors of "Raising an Optimistic Child."

If they ignore your child-care rules

Reiterate the rules. By disregarding your rules, your in-laws are sending a message to you and your children that they know what's best. You and your husband should let them know that when they disobey your rules, they're undermining your authority. Putting it in the context of what's best for your kids may help to hammer home the point.

"Rules need to be clearly set," says psychologist Pauline Wallin. "If you say no candy, no playing with toy guns, then none of that can happen. If it does, then don't let your in-laws watch your kids."

If you receive double holiday Invitations

Compromise and alternate holidays. If you find yourself celebrating every holiday twice -- at the expense of your time, budget, and waistline -- it may be the moment for a compromise. Decide with your husband on a schedule that gives both families equal time, and let everyone know the decision. Try alternating holidays yearly.

"If parents are acting like children, share with them our favorite preschool motto: 'You get what you get, so don't get upset,'" say authors Liz Bluper and Renée Plastique. And don't make false promises. If you don't intend to go to the holiday potluck, don't lead your in-laws to think otherwise; it could cause resentment. Be straight from the start. Still getting grief? Host the gathering in your home and invite both sets of parents to join you.

If they insist on their holiday traditions

Start your own traditions. When your in-laws visit for the holidays, they expect you to embrace all their traditions, rather than your own. But if the festivities are at your house, you get to make the rules. It's thoughtful to try to incorporate some of their traditions into yours, especially if there are children involved who could benefit from learning different ways of celebrating. But it's your home, and your in-laws should respect that. Gently communicate this to them beforehand so there are no surprises.

If they spoil your children

Establish spending limits. Make sure your in-laws seek your approval for any big-ticket items. Enforce these boundaries by setting up consequences for occasions they're violated. If your in-laws are bent on giving your children something outlandishly expensive, for example, tell them it will go to charity if they bring it against your wishes.