Should you dump an ex-abuser? 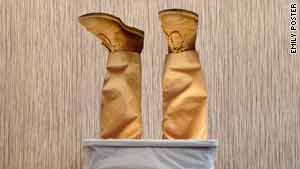 Would you toss a boyfriend in the trash if you found out he'd abused his ex?
STORY HIGHLIGHTS
RELATED TOPICS

Salon.com's advice columnist, Cary Tennis, fielded a question from a former abuser who's nervous about telling his new girlfriend he physically abused his ex-wife half a dozen times during their marriage.

After divorcing, "Ex-Abuser," as he signed his letter, entered therapy and said it helped him "understand my reasons for the abuse, and the effect it had on both my wife and our relationship." Also after the divorce, he and his ex-wife went to therapy together and "the abuse was addressed and some amount of nascent healing took place."

Now Ex-Abuser is in a new relationship with a woman he seems to want to spend his life with. Trouble is, he hasn't told her about his past. Not only is he afraid his new girlfriend will ditch him if she knows, but his ex-wife is threatening to spill the beans herself. And that, obviously, would be bad.

Of course, Ex-Abuser should tell his girlfriend himself, but I don't think it'll go as badly as he thinks. Maybe I'll get my Feminist Card revoked for saying this, but I don't think a man's abusive past should necessarily be an automatic dealbreaker.

The Frisky: Is 'the one' just a fantasy?

I believe people can change their mentally ill ways and behave healthily again. I've met enough sober alcoholics and clean drug addicts to know that is true. A lot of factors contribute to domestic violence in a relationship, but I have faith a man can be taught how and why he controlled and abused his partner and learn not to do it again.

The Frisky: Should we ask victims of domestic violence why they stayed?

That said, not every woman could handle dating a former abuser. Some abusers probably don't change too much, even if they say they have. A woman should be very, very careful about choosing to be with one -- a woman who is passive and non-confrontational probably is not the best candidate to date someone with a history of controlling behavior.

She'd also have to be willing to drop everything if he behaves abusively again and for a variety of reasons (kids, money, etc.), not every woman does that or can do that. Obviously, I believe men shouldn't be abusive. But I also believe forewarned is forewarned.

The Frisky: How to help a friend who's being hit

As for fears that his girlfriend will dump him, I think people are willing to forgive a lot of what has happened in the past.

I once dated a man who told me, six months into the relationship, that he had been arrested twice before (for silly, minor offenses). I was able to laugh off the criminal record because I was more annoyed that he hadn't told me sooner. All that time, I felt like I hadn't really known him!

The Frisky: Sometimes you shouldn't mind your business

Tennis' advice, in case you're wondering, was to propose that Ex-Abuser explain in detail his past behavior, how his behavior has changed from therapy, and what actions he takes every single day to ensure his new behavior sticks.

"People can believe you or not believe you. That's their choice," Tennis wrote. "Now, you can't blame people if they're just not interested."

But I think if Ex-Abuser's girlfriend is anything like me, she'll be freaked out for a couple of days. Maybe longer than a couple of days. But I hope she won't dump him and that they will have a healthy relationship together. If not, what the hell's the point in trying to reform abusers?