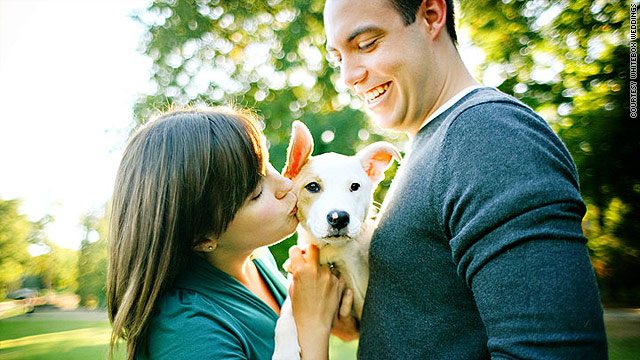 (OPRAH.com) -- In 2000, Brenda Allison graduated from law school and moved to Chicago. There, she found a supportive group of friends, an apartment within walking distance of the city's hottest spots...and absolutely no time to date.

"I'm a lawyer, and it's a job that takes up a lot of time," she says. "I didn't know how I was going to meet someone, especially when with what little free time I had I wanted to spend it with my friends."

Heeding advice from friends living in New York City, Allison turned to the Internet. "There weren't a lot of people using the Internet to date back then," she says. "I had to go to Kinko's and scan in a picture of myself for my profile." Soon after that, she was on a date.

"I met this guy for drinks, and everything was going fine. I have a tendency to mess with my hair when I get nervous, so I start running my hands through it. An hour or so into the date, he looks me straight in the eyes and says: 'You have got to stop touching your hair because it's driving me crazy. I don't know if I'm going to be able to control myself!' I didn't know what to say to that, so I told him my friends were at the back of the bar, which they were. I never went out with him again."

Oprah.com: How many coffee dates does it take to find the one?

For Allison, that night was the beginning of series of dating travails. Despite a few duds and near misses, her perseverance -- plus an online connection seven years later that resulted in a marriage proposal -- would eventually reaffirm her belief that online dating is an ideal way to make a real connection with another person.

"Meeting someone in a bar never quite worked out," she says. "The bar scene was always about 'Hey baby, you're hot' after a few drinks."

Though once considered the sole province of the nerdy and socially challenged, online dating has come a long way. According to online dating site Match.com, more than 20,000 people register to use the site every day. eHarmony says it has 20 million registered users on its roster and according to a recent study it commissioned, the dating site is responsible for 2 percent of all marriages in the United States.

How are all of these people finding success in love online? According to experts, honesty, patience and a well-thought-out profile are all anyone needs to find true love.

Oprah.com: What you need before you can find love

The key to successful dating online is a well-written user profile. A profile is the unique, customizable area on an online dating site that contains biographical information about yourself, as well as photographs and details about what you're looking for in a potential mate.

"A lot of people get really intimidated by the profile process," says Whitney Casey, relationship insider for Match.com. "But when you think about it, when you go out, you get only one chance to make a great first impression. With a profile, you get as many as you want."

Casey suggests new users break down their profile into four parts -- the picture, the headline, the username and the paragraph. Gather a group of friends to help you out, and go step-by-step. "Your friends are going to keep you honest," she says. "Plus, they'll make sure you use the best picture of yourself."

• Stay recent and real, Casey says. All pictures should be taken within the last six months and feature a head shot, as well as a full body shot. "Putting up pictures that represent what you look like means you don't have to worry later, if he or she doesn't call you to go out again, that it's because of how you look," Allison says. "Be honest about who you are."

• Avoid pictures of yourself with either too many props or too many other people. "Find a happy medium between being Action Jackson and Mr. or Miss Poser," Casey says. "Your main picture should be just you, and not you wearing sunglasses or you holding your dog. Use those photos for the supplemental pictures."

• Update photos as much as possible. Casey suggests including photos from recent vacations as well as those that feature you taking part in a hobby you enjoy. "They make good conversation starters," she says.

• Don't include too many pictures of you with other people."There are so many guys online who will include pictures of themselves with other women," Allison says. "You don't know who those women are, and it sends the wrong impression."

• Don't be too esoteric. Casey says it's fine to select a name that's clever, but don't pick something that will likely go over people's heads or come off as inaccessible.

• If the name you want is taken, don't try to force one. "Some people have usernames you need a decoder ring to decipher," Casey says. "All the numbers and letters jumbled together make it really hard to figure out what it means."

• Stay clear of anything too provocative. "Using something like 'legsfordays' as a username is probably not the impression you want to give if you're looking for a serious relationship," Casey says.

The Headline or Status Line

• Your headline should answer a basic question such as "What am I looking for?" Casey says the answer should be fun and playful and prompt people to want to click into your profile to get to know you better. "Something like 'This week I'm looking for a great cocktail date near Central Park' is fun and makes your profile stand out.

• Like the username, stay away from being too clever. "When you use too many puns or inside references, people aren't getting to know the real you," Casey says.

• Create three separate paragraphs. The first, Casey says, should be about who you are and what you like to do. The second should contain things such as your pet peeves and personal quirks -- anything that is unique and stands out from the crowd. The last paragraph should detail what your life looks likes now, including the most recent movies you've seen, books you've read or places you've visited.

• Be brief. No one wants to read a novel, Casey says, and users should be careful about sharing too much.

• Be as unique as possible. "There was a point where everyone dating online was reading "The DaVinci Code" and they all made statements like 'I'm equally at home in a dive bar as I am dressing up,'" Allison says. "Those people don't seem real. Specificity is what makes you stand out. Tell people if you took a week off of work to follow Pearl Jam. Let them know about your "Lord of the Rings" collection! It's the best way to catch someone's eye."

Get in It to Win It

Dr. Gian Gonzaga, a senior research scientist with eHarmony, says a key component to online dating is patience. "Imagine you're walking into a bar with 100 people in it. Services like eHarmony show you 10 people who you could go out with," he says. "But that doesn't mean they're perfect, just that they share important characteristics that are the basis for a good relationship. People spend years searching for a relationship. You can't give up because you go on a couple of dates that don't work out."

Oprah.com: What one woman learned from 100 dates

Casey agrees. "People put a lot of pressure on themselves when they date online, especially if people have exchanged a few great e-mails. Practice makes perfect. You have practice at dating."

In fact, both experts say that one of the hidden benefits of dating online is that it allows people to critically examine what they want out of life, not just out of a potential mate, in a way they hadn't done before. "It's supposed to be fun," Gonzaga says. "We love to hear the stories about people who end up married, but the life experience you gain, and knowing that people are going out and enjoying their lives, that makes us happy too."

In June 2007, Allison set a reminder for herself on her computer to cancel her online dating membership at eHarmony. The demands of her job had taken a bite out of her social schedule, and she hadn't found anyone promising in months. The money, she said, was going to waste.

"And then I got busy at work, ignored the reminder and forgot until I saw the deduction in my checking account," Allison said. "I was so mad at myself because I got tired of spending the money."

The very next day, she received this e-mail: "We'd like to introduce you to Jeff from Chicago." Nine months later, Jeff from Chicago asked Allison to marry him. In May 2009, they were married.

Casey says stories like Allison's aren't uncommon, but people should simply look at online dating as a means to an end. "You have to take every opportunity available to you," she says. "It doesn't mean you can't still meet people in real life; it just means you're enhancing your options."