Where all the good guys are

By John DeVore, The Frisky 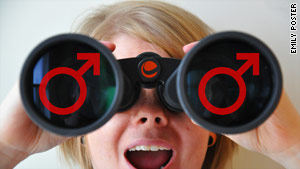 (The Frisky) -- Women always seem to ask me where all the good men are, as if these near-mythical dudes are hiding behind bushes, chained up in some vampire's basement, or are just rare and elusive, like the snow leopard.

Normally, I have to resist responding, "Maybe the good guys are just avoiding you."

But the answer to this frequent, lovelorn lament is simple: The good men are right under your nose.

And that's the damn truth. That's right, ladies. The good men you pine for are right there, all up in your grill, listening to your bellyaching, patiently enduring your inability to manage your own flamboyant, capricious romantic expectations and dreary reality.

These good guys are co-workers, classmates, and, most importantly, friends. You officially have my permission as a relationship expert with a Ph.D. in Broken Hearts from the University of Feelings, Emoburg campus, to fall in love with your male friends.

I blame your gender, after all, for inventing what The Frisky site refers to as "The Friend Zone." It's not a "zone." One loses weight in a "zone," or tells time there. Or learns a dark lesson about human nature during a twist ending.

No. "The Friend Zone" is actually a gulag. The Bermuda Triangle. A cruel little exile. Right now, there is a man in your life who feels you in his teeth, but who walks around with an "F" for "Friend" seared onto his forehead by a glowing-red iron you keep perpetually cooking in the furnace of your heart. You cannot think of him "that way."

At what point did he go from potential dating material to platonic bestie? Possibly the moment he started remembering your favorite alcoholic drink, instant messaging you about "Mad Men," and listening to you drone on about your thighs, again. Because love is intently listening to someone repeat themselves.

The Frisky: How to ex-orcise him from your life

This dude adores you and you are denying yourself potential joy because of some imaginary rule. The heart is a frontier full of peril and plunder, and you should not be afraid to explore what lies beyond hastily built fences.

The Frisky: How to know when you've found The One

I'm not saying men and women can't be friends. We totally can. I won't confirm the famous lesson from "When Harry Met Sally," which remains smug Baby Boomer treacle.

I don't want to sleep with all my female friends. I've thought about it, but I don't think that's gender-specific. Just human curiosity.

So do it! Hook up with your dude friend. Life is too short to be afraid of ruining a friendship, especially if there's a chance you could be more to one another, like epically cosmic lovers worthy of your own constellation in the night sky.

Friendships are as fluid as romances; they can end as suddenly as they can begin. In many ways, they're overrated. You know what's not overrated? Love. It's awesome.

The Frisky: 10 reasons to consider going on a blind date

We're talking about the meaning of life here. And it's to find someone whom you can grow old, fat, and ugly with. Our romantic rituals revolve around complete strangers negotiating for sex, then attempting to become friends. It's as if our society demands there's a dating you and a real you, and a relationship happens when two people agree to abandon the mutual lie. Cut to the chase. Friends already know how to play, laugh, and forgive each other.

The Frisky: My BFF is in a controlling relationship

Two of my longest relationships were with women whom I had been friends with. I loved them both, initially from afar. In both instances, we stepped off a cliff together without looking like the Fool in most tarot card decks. We took a risk, molted out of our friendship, and transformed into something else. And there was that moment of recognition, where we both said "screw it," took a risk, and realized that you can't win big if you don't gamble big. And a shot at conjugal and emotional bliss is quite a prize.

The Frisky: Should your boyfriend be your best friend

The first time, we were in the middle of a "Friends" marathon, and we took a break so she could shower. She came back with wet hair, and I had never seen her without make-up and when she plopped onto the couch, I kissed her. We both freaked out:

She stormed into the kitchen; I paced in a circle. Then we decided to make out some more. It helped. The second was a friend who proved to me she was no princess at a party by shot-gunning a can of beer. I immediately told her that I was falling for her, and she told me to wear a helmet. She kissed me, our quiet garden of a friendship suddenly a wildfire.

I wouldn't say I'm friends with these women; we broke up for the reasons people break up -- changing priorities, the mean little pianos life drops on your head. Maybe we would have drifted apart regardless. We're not friends now, but I don't regret giving it a shot. Kisses are the only things you can steal and never have to give back. And at least I'll have those until the day I croak.