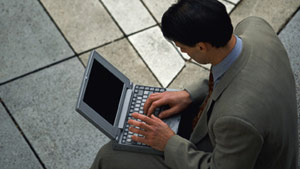 There are ways to sweep your digital dirt under the rug, say experts.
STORY HIGHLIGHTS
RELATED TOPICS

Gone are the days when all you were concerned with was whether or not your résumé and cover letter were error-free.

Now, you've got bigger things to worry about -- like what kind of personal information is floating around online.

Job seekers should not only manage how they come across in person, but on the Web, too.

We often forget that everything you post online, from your Facebook profile to your Amazon book reviews, is out there for others to see and judge.

"Most employers nowadays hop on Google to search a name as a preliminary step, either before or right after the interview," says Monique Tatum, author of "Jumping Off the Curb and Into SEO Traffic." "A positive and strong online presence can play a tremendous part in the employer's first impression."

In 2009, 45 percent of employers used social networking sites to research candidates, according to a CareerBuilder survey, a 23 percent increase from last year.

Thirty-five percent of employers said that what they found caused them not to hire a candidate.

"Hiring someone is scary," says Zack Grossbart, a virtual team coach and author of "The One Minute Commute."

"You're paying them to represent your company, and your reputation affects theirs. No company wants a newspaper headline with their name in it because of an embarrassing employee."

Not only has the use of the Internet, social networking sites, blogs and other new media skyrocketed in recent years; all of these things have revolutionized the job search.

It used to be that if a hiring manager dug around online and couldn't find anything, it was a good thing. Today, however, if you have no online presence, it could be more of a career killer than if an employer found some digital dirt.

"If you have an established career and no online presence, it is a big red flag for employers," Grossbart says.

"Employers expect to find blogs, forum posts, LinkedIn profiles and many other sources of information about you. If you haven't been mentioned by other people in a professional context, employers will wonder why not."

Of course, the flip side to creating an online presence is that nasty stuff can make its way into your Internet space.

As Marian Merritt, online safety advocate for Symantec, says, "One man's trash is another man's treasure and that's true online as well." And she should know.

"Early in my career, I said some things to an interviewer that didn't come out as eloquently as I'd like, and they live forever on the Internet," she says. "There's nothing I can do about that, as it was a news piece. That is permanent 'digital dirt.'"

Although it can be hard to cover your tracks on the Internet, experts say it is possible to get rid of those skeletons that have found their way from your closet to the Web.

Sweep the dirt under the rug

First, Merritt suggests using your name in search engine queries to see what is out there. Use every variation of your name and review every subcategory, from "Web" to "images" to "video."

Use multiple search engines and click on everything, since thumbnail images might not represent what is actually posted.

It also depends where your dirt is posted. If it's something on your social networking page or blog, you can delete it and it will eventually disappear. But Tatum says that if it's on a highly regarded site, it could remain out there for years.

Luckily, one of the easiest ways to get rid of your digital dirt is to create digital material of the good kind.

Tatum suggests developing your own positive content by creating articles, starting a blog or posting to forums. As long as you can smother any negative information about you, you should be OK in an initial employer search.

Something to be proud of

Here are five ways to build a digital footprint that won't scare away future employers:

Help people get something done or teach them something, Grossbart says. Respond to forum posts, answer questions or comment on blogs. Helping people is the perfect way to showcase your talents to potential employers.

2. Join social networks, both for career purposes and social purposes

"Tell people in your network you are actively seeking a job. Even if you use online job boards, it's more likely that your real-world network of people will help you find the job of your dreams, or at least move your application to the top of the pile," Merritt says.

3. If you can't delete it, smother it

"Potential employers are far less likely to find something if it is on the 10th page of your search results," Grossbart says.

4. Avoid joining groups or engaging in online activities that could embarrass or restrict opportunities

Of course, during a job hunt you should consider your overtly controversial activities such as political, religious or social movements, Merritt says.

It's all part of the online picture of you, so make sure it is the most accurate and flattering view. And it sounds obvious, but travel tips, book reviews and online gaming advice might not paint the picture of a "nose to the grindstone" kind of person, Merritt says.

"For example, one applicant was a fan of romantic novels, and I found myself reading her reviews on Amazon.com. There was no impact on her job application, but I did waste oodles of time."

Be wary of people out there on the Internet with the same name as you, Merritt says.

"What if your cybertwin is in prison or owns a racist Web site? Find out who is out there with any variation of your name and be prepared to discuss and explain."