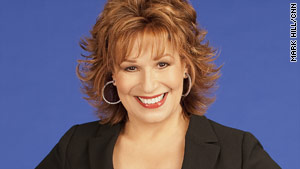 New York (CNN) -- In the schoolyard of American politics, President Obama is the big, smart kid with all of the test answers who's being bullied by a bunch of Neanderthal ankle-biters from all sides.

Meanwhile, all the teachers are wondering, "Why does he take this crap? He's bigger and smarter than all the other kids."

It's no surprise the Glenn Becks of the world have been attacking Obama since the moment he stepped into the Oval Office. Beck and his blathering buddies on the right -- you know, the stinky kids in the coatroom who eat their own boogers. Always pick on the kids least likely to fight back.

That being said -- we did elect President Obama to change things, and so far the only thing he seems to be changing are his faux-patriotic lapel pins ... and his mind.

With the public option in the public toilet, not asking or telling about "don't ask, don't tell," the Gitmo Hilton still entertaining guests, and same-sex marriage so far off Obama's radar that it's now on his sonar, seeds of doubt have been planted in the left's collective mind.

If this guy can't get his own party to step in line on health care reform, they wonder, then how the hell will he get other countries to do what he wants them to do? Although in some ways, that might be easier then dealing with these Blue Dogs who hump your leg ... and not in a good way.

It's a valid concern. However, we can't expect him to accomplish all this sweeping change in less than a year. It's important that he lay the groundwork instead of just going all "Decider" on everyone and making gut choices.

But he can't just be "The Thinker," either. Last time I looked, "The Thinker," by Rodin, had been sitting on his butt in the exact same place, for years.

Unfortunately, laying groundwork doesn't win you any fans -- well, besides a few Nordic voters on the Nobel panel. Flexing muscles, now that wins you fans. Just ask the Governator. That's why the Financial Times said it's time for President Obama to pick a fight and win it in a knockout.

But instead of working on that knockout, President Obama and his White House cronies are feuding with Fox News. While I'm loving this Fox hunt, the White House's strategy boggles my mind. This is not a war of necessity. Picking a fight with them is kinda like going to a biker bar after midnight -- as my mother used to say, "Nothing good can happen." That is, unless this heavyweight bout keeps escalating and we actually get to see Glenn Beck prancing around in a pair of sequined boxing shorts.

When you disregard the action against Fox News, Obama seems to be paralyzed, like a frog that's had it stomach rubbed -- which may the reason he's got problems on both sides of the lily pad.

Admittedly, I might be overreacting just a bit. The majority of the country is behind Obama. The situation just seems worse than it is because we're not used to this new era, in which you can actually criticize the president without being shouted down as an unpatriotic, Socialist, traitorous, granny-killing, freedom hater. After eight years of a presidency shrouded in darkness, we're not used to seeing the president's supporters, of all people, shining a light on his shortcomings.

Back to the schoolyard, where Barry Obama is being bullied. You know what? He's big, he can take it. You know why? Because not only is he right in his beliefs, but he knows that if push comes to shove, he can lay out the rest of these runts with a couple of good smacks of his presidential pen.

It's not time to panic, but President Obama needs to size up one of these twerps, cock back his arm, and take a swing soon, because the Democratic majorities in Congress won't last forever.

President Obama won 53 percent of the vote last November, so we know he has it in him to win the big battles. We know he has a lot on his plate. But we just want one decisive victory. That's all we're asking for. A show of strength. Something to grow on. Show these class clowns who they're messing with. You don't have to be "The Decider." Just the president.

The opinions expressed in this commentary are solely those of Joy Behar.