By Sam Waterston, Special to CNN 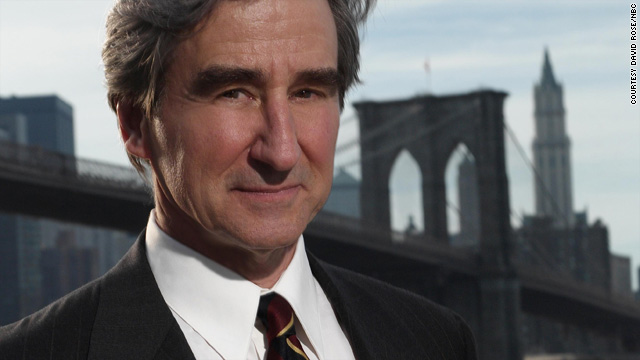 Editor's note: Sam Waterston is an award-winning stage, film and television actor who is best known for his long-running role as prosecutor Jack McCoy on "Law & Order." He is a member of the board of directors of Oceana, a nonprofit organization that seeks to protect the world's oceans by opposing overfishing and pollution.

(CNN) -- As a native New Englander, I know full and well how much we depend on the oceans. They have often been a solution for our problems.

They've been a highway for goods and people, connecting us to the world, and a barrier against foreign invasion, protecting us from the world; a source of food and wealth, going back to our earliest beginnings, when whale oil lit our houses and when cod were so plentiful that huge specimens were commonly stacked like cordwood on our docks and wharves, and still there were so many that you could almost walk on their backs across some harbors.

Until the recent unrelenting hammering by our technologically impressive, very efficient, very destructive commercial fishing fleets, the seas have seemed an inexhaustible cornucopia of sea life for our sustenance, delight and wonder.

Now, science tells us the global wild fish catch is, for the first time in history, declining. Fortunately, we also know what steps our governments need to take to reverse this trend -- steps that can again return our seas to abundance.

But, along with the ravages of industrial-scale fishing, there is another even more troubling story to tell about our oceans. For centuries, our oceans have been an uncomplaining dump. They've absorbed our waste --- from manufacturing, power generation, and oil spills, and our nuclear waste, our trash, and our sewage.

And carbon. For the last 250 years, the oceans have absorbed 30 percent of the carbon dioxide we put into the atmosphere through the burning of fossil fuels and deforestation, moderating and masking its global impact. They take in 11 billion metric tons of carbon dioxide per year. Each year, the amount we release grows another 3 percent.

What happens to the carbon dioxide absorbed by the seas is something that you should understand if you love seafood or care about the millions of fishing jobs vital to coastal towns.

"For centuries, our oceans have been an uncomplaining dump."
--Sam Waterston
RELATED TOPICS

Carbon dioxide combines with seawater to create carbonic acid, raising the acidity of that vast solution and reducing the amount of available carbonate. And that is serious mischief for all kinds of sea life, from corals and pteropods, continuing on through shellfish, clams, oysters, lobsters, mussels and so on, which need carbonate to make the structures that support them.

A chain reaction begins. Even creatures whose own structural parts might better survive a decrease in available carbonate in sea water depend to one degree or another on critters with higher sensitivity. Whales and salmon eat pteropods for dinner. The very tasty and much-prized Alaskan pink salmon makes pteropods 45 percent of its diet.

Many kinds of fish need corals for habitat. And corals aren't just tropical -- the colder the water they live in, the more vulnerable they are to changes in the availability of carbonate.

The current acidification level hasn't been seen for at least 800,000 years, and acidification is coming on 100 times faster than at any point for hundreds of thousands for years. The levels are alarming. The rate of change makes them even scarier, because it so restricts the ability of sea creatures to adapt.

In contrast to the debate that continues about the causal relationship between this or that weather event and human activity, there is no debate about the source of ocean acidification. The change in the chemistry of the ocean is a man-made event, plain and simple, and the consequences of its continuing rise in acidity will belong squarely to us.

It will make for some uncomfortable moments around the dinner table when our children and grandchildren ask, "What did you do in the [climate] war, Daddy?" If we don't recognize the ocean's warning, the first cataclysm from man-made carbon dioxide emissions that will get our attention will be the collapse of the oceans.

If we do recognize the warning, the oceans are ready to be a solution. Power in the tides and waves is there to tap. Offshore wind power is a technology that's ready to go right now, near the great population centers on our coasts, where it's most needed.

For 800,000 years, the seas were a stable solution, a hospitable solution for all sorts of creatures to live in, and a generous solution to all sorts of human problems, from food supply to waste disposal. We must not make them inhospitable, for people or for the 80 percent of life on the planet that lives in them.

Carbon dioxide in the sea is the front line of climate carbon addiction. Reverse the trend toward ocean acidification, and we will also have made a giant stride in addressing the effects of climate change. The sea is warning us to change course and calling us to seize enormous opportunities. Now.

The opinions expressed in this commentary are solely those of Sam Waterston.