VA assistant secretary: 'My crew thought I was dead' 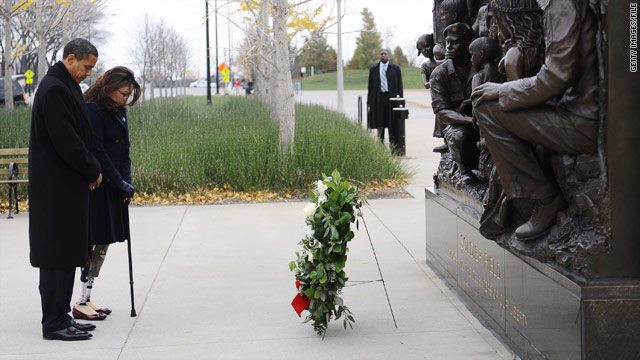 Editor's Note: L. Tammy Duckworth, an Iraq War veteran, is assistant secretary for public and intergovernmental affairs at the Department of Veterans Affairs. She lost both legs and partial use of one arm when a helicopter she piloted was attacked by a rocket-propelled grenade in Iraq in 2004.

I am alive today because my helicopter crew lived by these words.

When our aircraft was shot down in November 2004, the injuries I sustained were devastating.

The amount of blood I had lost in a matter of minutes was so vast that my crew thought I was dead.

They could have left me in that dusty field in Iraq, but they didn't. Instead, they stood their ground in the face of approaching enemy, risked their lives, and carried me to safety.

They did this regardless of whether I was dead or alive, because the American warrior does not leave a fallen comrade behind.

My crew and all the men and women in the U.S. armed forces know what it means to be a part of something greater than themselves.

They are America's finest sons and daughters, and we made a promise to care for them after they serve. It is our job in the Department of Veterans Affairs to make sure that promise is kept.

We at VA stand at a historic time with great opportunities to further our mission in caring for the nation's 23.4 million veterans and their families.

With the largest one-year percentage increase in VA's budget in over three decades, President Obama has made it very clear that serving our nation's veterans is a top priority in his administration.

He wants to increase funding for VA by $25 billion above our current baseline over the next five years.

He launched a new initiative to expand eligibility for veterans' health care to as many as 500,000 Priority Group 8 Veterans who were previously denied care.

And he wants us to invest in better technology to deliver services and benefits to veterans with the quality and efficiency they deserve.

As commander in chief, President Obama has charged Secretary Eric Shinseki and all of VA's leadership with a new mission: to transform VA into a 21st-century organization.

Secretary Shinseki has begun to do just that by making VA a more veteran-centered, results-oriented and forward-looking department.

It will be a different organization from the one that exists today. It will be accessible, responsive and transparent.

To achieve the president's vision, we must leverage new technologies to serve the various demographics and needs of today's veterans, while also renewing our commitment to the older generation of veterans.

These technologies will carry us well into the 21st century as we maintain our mission to serve our nation's veterans for the rest of their lives.

Tonight, 131,000 veterans will sleep on the streets of our cities.

These are the same men and women who allowed us to have the opportunities to go to school, get a job and buy a home.

We are all dishonored anytime a veteran is forced to sleep on the streets, and President Obama, Secretary Shinseki and the VA leadership team will not stand for this.

Within the next five years, we aim to eliminate veteran homelessness by providing grants to community-based organizations assisting homeless veterans and by attacking all the areas that often lead to homelessness.

Our veterans deserve better, and we are determined to provide them the best care and most timely benefits possible to end homelessness in their ranks.

We will improve medical care to minority veterans, including female veterans, who are enrolling in VA at historic rates.

We will also improve access to VA for veterans who live in rural areas.

All our veterans deserve the best care possible regardless of race, gender or where they live.

And we are working with the Department of Defense to build a fully interoperable electronic records system that will provide each member of our military with a Virtual Lifetime Electronic Record.

For VA, this will revolutionize our claims process by making it faster with higher-quality decisions and with fewer errors.

Five years from now, we intend to make VA the provider of choice for veterans -- in insurance, health care, education, home loans and counseling.

We are going to be the advocate for veterans, their dependents and survivors to make sure we meet their needs, hear their concerns, and take proper action.

We know that we have a big task ahead of us. But there is not a population more deserving of the absolute best than the men and women who have sacrificed so much for our freedoms.

In the same way that my crew refused to leave me behind, each and every one of us at VA will fight everyday for our nation's military heroes to ensure that they are never left behind.

It is our turn to serve America's warriors, and we at VA consider it a privilege.