Europe job was too small for Tony Blair 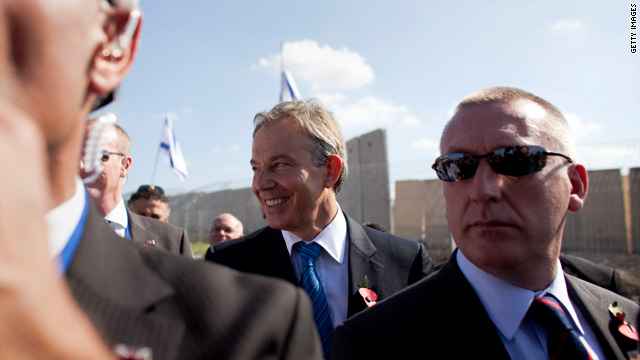 Tony Blair, shown at a crossing between the West Bank and Israel, didn't get the EU presidency but remains a Mideast envoy.
STORY HIGHLIGHTS
RELATED TOPICS

London (CNN) -- Faced with a choice for its new president between the traffic-stopping Tony Blair and a capable but little-known Belgian, the EU's 27 leaders settled on Herman Van Rompuy, a man who would scarcely stop two mothers with strollers outside his own country.

Swedish Prime Minister Fredrik Reinfeldt, who was in charge of the election process, gave the game away when he said that Van Rompuy was a man whose choice would "leave room for everyone."

By insisting that "unity is our strength, diversity our wealth," Van Rompuy has signaled that he intends to be a consensus-building chairman, an agenda assembler, not a leader who will blazon Europe's name across the world and mingle monthly with the likes of Barack Obama and Hu Jintao.

Both Van Rompuy, who as Belgium's prime minister has held together a five-party coalition in a badly divided country, and Cathy Ashton, the new high representative, are capable, pragmatic and hard-working politicians who get results by their application to the tasks at hand. But both lack recognition outside their own countries, and neither will help glamorize the EU or increase its worldwide punching power.

So why has the EU turned its back on the man who might have supplied the stardust, Tony Blair?

The simple answer is that for most of the 27 EU leaders, Blair was too big for the job. They feared he would have his own agenda and overshadow them. Many saw him as an over-close ally of America who had divided Europe when he helped George W. Bush to prosecute the Iraq war.

Others distrusted him as the market-oriented epitome of the Anglo-Saxon model on economic affairs when Europe prefers a more consensual approach with economic social partners.

And several, like presidential candidate Jean-Claude Juncker, the long-serving Luxembourg prime minister, scoffed at Blair's record of support for European integration in his years as Britain's prime minister. He was the one man, they felt, who could have taken Britain into the single currency -- rather than hang on to the British pound -- and he failed to drive the project through.

EU leaders have not forgotten how, toward the end of his time as UK prime minister, a patently bored Blair used to look regularly at his watch as EU meetings took time to draw to a close.

Some also had old scores to settle. The Belgians, for example, had not forgotten that it was Blair who in 2004 vetoed the appointment of Guy Verhofstad, their former prime minister, as president of the European Commission, the EU's executive arm.

There was also one other key factor in the horse-trading stitch-up process by which the EU leaders made their choice. The other leaders, who can read the opinion polls, have clearly taken the view that Blair's successor as Labour Party leader and prime minister in Britain, Gordon Brown, is heading for defeat at the general election due in Britain by June of next year.

The UK Conservatives and their leader David Cameron had made it plain that if the other 26 EU leaders went for Blair as president, they would regard that as a "hostile act." Certainly, there would have been difficulties for them in working with him.

(The "Conservative factor" also probably affected the choice of Ashton, a woman who has never held elected office, as the first EU high representative on foreign affairs. By giving Britain a consolation prize, the other leaders were able to counter in advance any accusations by the Eurosceptic Conservatives that Europe is hostile to the UK).

Given the obstacles he had to overcome, some wonder why Blair, who never actually campaigned for the job, let it be known that he was interested in becoming EU president. The answer is that at only 56, Blair is comparatively young for a former prime minister. A natural communicator, he has confidence and energy and still wants a challenge. Politics is what he does.

For the moment, the former UK prime minister will have to content himself with continuing as the Middle East peace envoy for the "Quartet" of the U.S., the UN, the EU and Russia, a job that most would regard as a daunting enough prospect on its own.

But Blair will keep himself busy combining that role with raising funds for the Tony Blair Faith Foundation, running an Africa Governance Initiative, milking the international after-dinner speaking circuit and pocketing fees for his company, Tony Blair Associates, by facilitating deals between government leaders and global businesses.

The way things have turned out, he won't be too sorry to have missed the Europe job. Those in the United States and elsewhere who were expecting a significant new figure on the world scene, carving a name for himself while punching the weight of Europe's 500 million citizens, are going to be disappointed. In Van Rompuy, they are not going to see an EU president who eyeballs Vladimir Putin on energy security or cuffs Obama for not doing enough about climate change.

As the horse-trading reached its final stages, a much more constrained job description emerged for the role of president of the European Council of Ministers. More and more EU leaders decided that they wanted not a worldwide figurehead with a bold agenda and top-level contacts, but a consensus-seeking meeting facilitator.

The EU president has duties rather than powers. He chairs EU summits (usually four a year), drives forward the work of the Council of Ministers, facilitates cohesion and represents the EU on the world stage. But the powers remain essentially with the 27 heads of government.

Herman Van Rompuy, who as the first occupant of the chair will largely define the role, has said that his own opinions count for nothing and that his task is simply to seek to draw a European consensus from the views of national leaders. That would never have suited Tony Blair.

The opinions expressed in this commentary are solely those of Robin Oakley.