By Ed Bark, Special to CNN 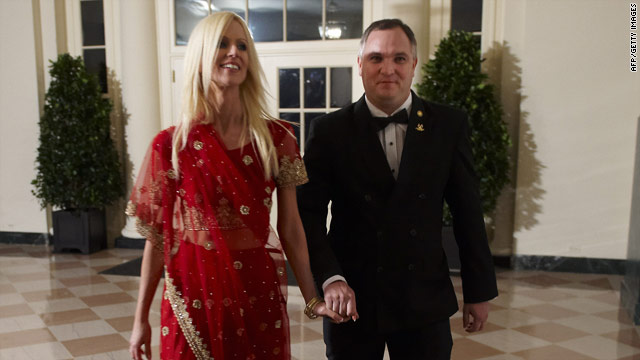 Michaele and Tareq Salahi crash a White House state dinner in an apparent attempt to have a better shot at a reality show.
STORY HIGHLIGHTS
RELATED TOPICS

(CNN) -- All the world's a stage, Shakespeare wrote long before television came into view.

Everyone will be famous for 15 minutes, Andy Warhol added a few centuries later.

Which leads us inexorably to Michaele and Tareq Salahi's exuberant Facebook posting: "Honored to be at the White House for the state dinner in honor of India with President Obama and our First Lady!"

They have the pictures to prove it, and the overnight fame, too. The Salahis, with a Bravo camera crew in tow, apparently were trying to ratchet up their prospects for the cable network's upcoming "The Real Housewives of D.C."

If only the Salahis were the exception. But the modern-day reality show genre, spearheaded nearly a decade ago by the first edition of CBS' "Survivor," has become a tidal wave of cost-efficient TV programming starring ... pretty much anyone. Its inhabitants increasingly are called on to step up the pace in pursuit of myriad available slots on networks large, small and sometimes desperate. Stand out in a crowd, or be pushed aside by someone who will.

Crashing a White House state dinner has proved to be just the ticket for the fame-craving Salahis. Their audacious breach of Secret Service security has trumped the reality show aspirations of the "balloon boy" family and possibly even knocked Jon Gosselin out of the "Entertainment Tonight" spotlight for a day or two. Imagine that.

What does this say about us as a people? Well, the quest for fame is hardly new. Nor is our collective fascination with train wrecks. What's changed is the escalation in available venues. There's seemingly no limit to the number of enablers out there. Hitting it big with a "reality" franchise can work wonders for a TV network's bottom line, overall visibility -- or both.

Once upon a time, TLC was The Learning Channel. You actually could learn something by watching its instructional and educational programming. But the network gradually got out of that business. And it hit the mother lode with "Jon & Kate Plus 8," which eventually became the public face of a broken marriage while making the Gosselins internationally famous.

Bravo, home to the ever-expanding "Real Housewives" franchise, used to devote itself to the performing arts. That began to change in a hurry after NBC Universal took control of the network in 2002. The network now offers a virtual wall-to-wall reality lineup, with only occasional intrusions from "Inside the Actors Studio," the only remaining evidence of what Bravo used to be.

A&E originally launched as the Arts & Entertainment Network. Believe it or not, it once housed an anthology series, "A&E Stage," that brought its audience plays, concerts, documentaries and even opera. The reality bug long since has bitten hard, though, with the once high-minded cable outlet now best known for "Dog the Bounty Hunter, Intervention" and "Criss Angel Mindfreak."

MTV used to be nothing but music videos. "The Real World" changed everything. NBC had a long and well-earned reputation for Emmy-caliber comedies and dramas such as "Seinfeld," "The Cosby Show," "Frasier," "Hill Street Blues," "ER" and "L.A. Law." Now its most popular attraction, other than "Sunday Night Football," is a weekly two-hour dose of "The Biggest Loser," where little other than size matters.

Against this backdrop, the Salahis in a way are only acting naturally. That's lamentable, a sad commentary, an appalling sign of our times, etc., etc. But TV has created -- and continues to create -- a bottomless pit of venues where preeners are prized commodities and abnormal behavior is not only encouraged but intrinsic to the common goal.

The lone exception these days appears to be major league baseball. When a goofball fan runs out onto the field, the cameras turn away so as not to reward the trespasser with a minute or two of national or regional exposure.

What a concept. Too bad it'll never catch on.

The opinions expressed in this commentary are solely those of Ed Bark.