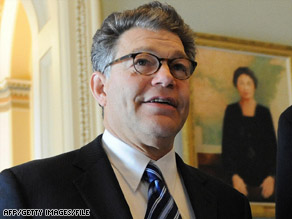 A board will say Al Franken won the U.S. Senate race by 225 votes, Minnesota's secretary of state says.

The canvassing board on Monday will say a recount determined Franken won by 225 votes, Secretary of State Mark Ritchie told CNN.

However, Coleman's campaign, which contends the recount should have included about 650 absentee ballots it says were improperly rejected in the initial count, has indicated it will challenge the certification.

Coleman campaign manager Cullen Sheehan said his team believes the recount process was broken and that "the numbers being reported will not be accurate or valid."

"The effort by the Franken campaign, supported by the secretary of state, to exclude improperly rejected absentee ballots is indefensible and disenfranchises hundreds of Minnesota voters," Sheehan said.

After the results are certified, Coleman's campaign will have seven days to file a challenge.

The initial count from the November 4 election put Coleman, a first-term senator, 215 votes ahead of Franken -- known for his stint on NBC's "Saturday Night Live" and as a former talk-show host on progressive radio network Air America.

During the recount, Franken's campaign alleged that thousands of absentee ballots had been improperly rejected and asked that they be counted. The state's Supreme Court eventually ordered that rejected absentee ballots be counted if local officials and each campaign could agree that the selected ballots were rejected mistakenly.

The Coleman campaign has also alleged that more than 100 ballots may have been accidentally counted twice and may have unfairly benefited Franken.

"When a candidate is leading because of double counted votes, and votes that get counted even when ballots don't exist, it clearly means that a [post-election challenge] is the only likely remedy to ensure a fair outcome," Sheehan said.

Franken's attorney, Marc Elias, in a statement said: "The next step is the canvass board's meeting tomorrow, where we have every expectation they will declare that Al Franken won this election."

Deputy Secretary of State Jim Gelbmann, who oversaw Saturday's tallying of the 950 improperly rejected absentee ballots, said the only thing left for the canvassing board to do Monday is certify the numbers. The board's meeting will convene at 2:30 p.m.

"Candidates may have objections or suggestions or comments that they want to make," Gelbmann said. "I would assume the canvassing board will allow that as long as they're brief."

"There is no longer any doubt who will be the next senator from Minnesota," Schumer said. "Even if all the ballots Coleman claims were double counted or erroneously added were resolved in his favor, he still wouldn't have enough votes to win."

Schumer also said it is "crucial" Minnesota's second seat in the Senate not go empty, implying Franken should be seated when the rest of the Senate convenes to be sworn in Tuesday.

Minnesota's other seat is held by Sen. Amy Klobuchar, a Democrat.

Republican Sen. John Cornyn of Texas, the chairman of the National Republican Senatorial Committee, has pledged a GOP filibuster if the Democrat-controlled Senate attempts to seat Franken before all legal battles play out and before Minnesota's Gov. Tim Pawlenty, a Republican, can co-sign the secretary of state's certificate.

Ritchie said the state has no problem with not having two sworn-in senators Tuesday until the process is completed.