House to vote on stimulus after inauguration, Pelosi says

WASHINGTON (CNN) -- Speaker Nancy Pelosi said Thursday that House committees will begin action on President-elect Barack Obama's proposed economic recovery package in the next couple of weeks, with a vote in the full House slated for the week after Obama's inauguration. 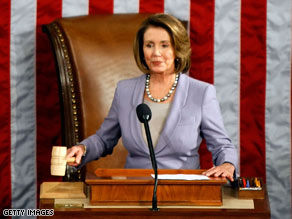 Speaker Nancy Pelosi says the House will not go on a break until an economic recovery package is passed.

If that schedule slips, Pelosi, D-California, pledged to cancel the House's planned weeklong break in mid-February for Presidents Day.

"We are not going home without an economic recovery package," Pelosi said.

A senior Pelosi aide said discussions about the details are ongoing between the Obama transition team and key leaders. The Ways and Means Committee will focus on the tax piece, approximately $300 billion in tax cuts.

Obama transition aides met with Democrats on that committee Wednesday morning to discuss various proposals, according to another Democratic aide.

The Appropriations Committee is tasked with drafting details on spending hundreds of billions of dollars on infrastructure projects, food stamps and other aid to states.

Sidestepping a question on possible roadblocks for the bill, Pelosi instead touted the new muscle of the expanded Democratic majority.

"We have been so used to an uphill fight, but now we have arrived. We have a big, strong, something like an 80-vote majority in the Congress, in the House, with a Democratic president in the White House," she said.

In a speech Thursday, Obama said it was imperative that Congress move quickly to pass the stimulus package once he takes office, warning that a failure to do so would have devastating long-term consequences to the nation's economy.

"We start 2009 in the midst of a crisis unlike any we have seen in our lifetime, a crisis that has only deepened over the last few weeks," Obama said at George Mason University in Virginia.

Watch Obama call for "dramatic action" on the economy »

"I don't believe it's too late to change course, but it will be if we don't take dramatic action as soon as possible," Obama continued. "If nothing is done, this recession could linger for years."

Key members of Obama's own party, however, said they opposed central tax measures of the president-elect's proposals after emerging from a closed-door meeting of the Senate Finance Committee.

In particular, they do not think that giving employers a $3,000 tax credit for each worker they hired would work.

"I'm not that excited about that," said Sen. John Kerry of Massachusetts. "Having a tax credit for hiring is not going to change that dynamic; creating a direct job will. So I'd rather spend the money on the infrastructure, on direct investment, on energy conversion and other kinds of things, much more directly and much more rapidly and much more certainly create a real job."

"I think it's unlikely to be effective," the North Dakota senator said. "If you think about it, businesspeople are not going to hire people to produce products that are not selling. Who is going to hire in the auto industry if you give them a $3,000 credit to make cars that people are not buying?"

A second Obama tax proposal that several Democrats were down on is payroll tax credits, amounting to about $20 per paycheck and totaling $500 per person and $1,000 for couples earning less than $200,000 a year.

Sen. Ron Wyden of Oregon said he doubted that proposal would do much to stimulate the economy.

"We have an example from the first stimulus that indicates just giving people $500 to $600, while certainly welcome when there's this much economic hurt, may not be the best use of stimulus," Wyden said.

Instead, Wyden said, pumping more money into infrastructure spending would be more effective in creating jobs.

"Twenty dollars a week? I don't think that will be effective, either. That is in terms of economic impact. We have got to focus on what is actually going to lift the economy," Conrad said.

None of the senators CNN spoke with after the meeting said they thought the opposition to these provisions would derail the bill but suggested that many meetings would be needed with the Obama team to hammer out an agreement.

First votes in the Finance Committee, which must approve the tax components of the stimulus plan, could come in the next two weeks, senators and aides said.

All About Nancy Pelosi • Economic Issues • U.S. House Committee on Ways and Means