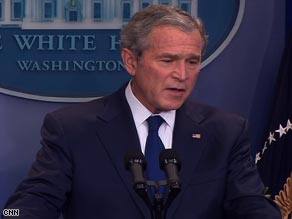 President Bush addresses reporters at the White House on Monday in his final news conference.

"Clearly, putting a 'Mission Accomplished' [banner] on an aircraft carrier was a mistake," Bush said about how his administration handled the fall of Baghdad to U.S. troops. "It sent the wrong message."

He termed other aspects of the U.S. invasion of Iraq "disappointments," including the failure to find weapons of mass destruction and the treatment of prisoners at Abu Ghraib prison.

"I don't know if you want to call those mistakes or not, but they were -- things didn't go according to plan, let's put it that way," Bush said.

Admitting another mistake, Bush said that he should have pursued a comprehensive immigration overhaul after the 2004 election, instead of Social Security reform. He said that Congress did not have the political willpower to tackle Social Security at the time because the program was not facing an "imminent" funding crisis.

But Bush said plenty went right during his eight years in office, including the economy for most of his term.

"I inherited a recession, I'm ending on a recession. In the meantime, there were 52 months of uninterrupted job growth," he said.

The Bushes on 'King'

"And I defended tax cuts when I campaigned, I helped implement tax cuts when I was president, and I will defend them after my presidency as the right course of action." iReport.com: How will you remember Bush?

Bush also said that despite harsh criticism at the time, the federal government responded well to Hurricane Katrina and the flooding of New Orleans, Louisiana, in 2005.

"Don't tell me the federal response was slow when there was 30,000 people pulled off roofs right after the storm passed," he said Monday.

"Could things have been done better? Absolutely. Absolutely. But when I hear people say the federal response was slow, then what are they going to say to those chopper drivers or the 30,000 that got pulled off the roofs?" he asked.

Bush was steadfast that his administration did the right things in protecting the homeland from terrorists, even though critics said individual freedoms were compromised by administration policies.

"In terms of the decisions that I had made to protect the homeland, I wouldn't worry about popularity. What I would worry about is the Constitution of the United States and putting plans in place that make it easier to find out what the enemy is thinking," he said.

The 43rd president says he doesn't buy allegations that America's image overseas has been tarnished during his terms, even if his popularity has suffered.

"My view is that most people around the world, they respect America. And some of them don't like me -- I understand that -- some of the writers and the, you know, opiners and all that. That's fine. That's part of the deal. But I'm more concerned about the country and -- and how people view the United States of America. They view us as strong, compassionate people who care deeply about the universality of freedom."

Bush said that as a "Type A" personality, he'll want to keep active after he turns the White House keys over to President-elect Barack Obama next Tuesday.

"I just can't envision myself, you know, the big straw hat and a Hawaiian shirt sitting on some beach," he said.