(CNN) -- The last eight years In the United States have included momentous events including the September 11 attacks, the Iraq war, Hurricane Katrina and an economic recession. 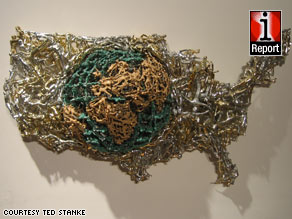 Ted Stanke of New York created a symbolic map of the United States out of toy soldiers to protest the Iraq war.

Historic moments defined President Bush's time in office, and now the world must wait to see how history will define him.

Just 27 percent of the respondents to a recent CNN/Opinion Research Corporation poll said they approved of Bush's handling of his job as president.

We asked readers to share their views on Bush's legacy on iReport.com. The majority of the responses expressed disappointment with the president's performance. Many readers with whom we spoke said they were deeply frustrated with the way Bush handled issues such as the Iraq war, the economy and Hurricane Katrina.

Cathy Cott, 49, of Tahlequah, Oklahoma, vented her "boiling anger" on iReport.com. She voted Republican for 22 years until after the 2000 election when Bush won a narrow victory over Democrat Al Gore. She says she is now a registered Democrat who voted for Barack Obama. iReport.com: Bubbling over

"I guess the simplest reason for my boiling anger is I have three kids and they will spend their lives paying for Bush's policies, wars, economic disasters and the general mess he is leaving behind both monetarily and in their general quality of life," Cott said.

"Eight years of frustration" over the Iraq war and other military decisions inspired New York artist Ted Stanke to create painstakingly detailed and unmistakably symbolic artwork from toy soldiers. One piece shows a map of the United States with an inset globe made from the tiny fighters, while another depicts a bush constructed from the soldiers. iReport.com: See Stanke's toy soldier art

Some iReporters say they still support Bush, while others said they voted for him but changed their minds about him later.

Kathi Cordsen is a Republican who describes herself as a Bush supporter. The Fullerton, California, resident says the September 11 attacks profoundly changed the way people perceived Bush. She says many people were too unwilling to give him a chance. iReport.com: In defense of Bush

"He is a funny man, a kind man, a bit of a goofball and not very well-spoken," Cordsen said. "But, he would not have been treated the way he is being treated now if not for 9/11. His presidency was thwarted by the 'evildoers.' I love that term of his."

Chuck Burkhard of Windber, Pennsylvania, hopes history will remember Bush as a strong man who loved his country.

Burkard said the president juggled unprecedented challenges during his term, including dealing with terrorism and facing up to financial forces that may not have been under his control. Critics of Bush should look within themselves for answers, he said. iReport.com: Working overtime

"Most of us are spoiled by a have-it-our-way-now and reckless generation that must stop borrowing so much and start working more. We shift blame instead of looking to ourselves for resolve and drive."

Burkhard said he feels Bush is one of the most overworked presidents in history and has shouldered too much blame for the current state of the economy.

"I personally have never seen this much responsibility thrown onto our country, in such a small amount of time," Burkhard said. "We are responsible for the world economy, the global war on terror, global warming. You name it, we have our hands in it."

Chris Molisani of Rochester, New York, says September 11 was a defining moment, not just for Bush's presidency, but also in his own life. He was in high school and college during Bush's eight years in the White House. iReport.com: Look back on how Bush changed the country

He can scarcely remember the Bush presidency before 9/11 and expects phrases such as "weapons of mass destruction," "Axis of Evil" and "You're either with us or against us" to be associated permanently with him. He hopes for a brighter future with President-elect Barack Obama.

"History will likely be kinder to Bush than his contemporaries are, but a Washington, Lincoln or Roosevelt he will not become," Molisani said. "What is interesting to note is that some of the worst presidents in history have been followed by the best presidents. Perhaps we will have a bright future to look forward to."

Maria Davis of Prescott Valley, Arizona, voted twice for Bush but now regrets her decision. Her dislike for the Democratic candidates' running mates in 2000 and 2004 was a major factor, she said. iReport.com: Watch Davis discuss the pros and cons of the president's time

Although she wants Bush to get out of the national spotlight, she feels he needs to speak to the people and mend wounds. She hopes he will follow Sen. John McCain's example and make a gracious speech after the inauguration.

"Speak to the American people passionately and gracefully about Obama taking the presidency," Davis said. "That would probably help people."

His presidency wasn't all bad, she said.

"Well, he was good for 9/11, and he caught Saddam [Hussein], but he ran the country into the ground with unneeded funding for an unneeded war in Iraq," she wrote.

Overall, Davis has mixed feelings now and has felt uneasy for a long time. She was laid off from her job and is trying to run a home eBay business that barely pays rent. She is having trouble finding jobs that pay more than $7 per hour. Her brother, who has a house payment and a child to support, was recently laid off, as well. She hopes the country can rebuild.

"It's hell, it's absolutely hell," she said. "I really hope Obama can fix the economy so we can have our lives again and live the American dream."

The desire to dream again was a common theme, and many iReporters said they yearn for more hopeful times.

Robin Savage of San Juan Capistrano, California, said Bush's greatest legacy is the passionate voter turnout he unintentionally inspired in the 2008 election. She said she is glad to see Obama's rise as a result. iReport.com: One last thing before he goes

"I think the one thing President Bush will be remembered for is not being able to really connect with people. If you compared him to Obama, I tell you, what a difference there is."

Patrick Finney of Portland, Oregon, said he felt there was a large disconnect between Bush and the American people. He says the president ignored what ordinary folks wanted.

"I am afraid that George Bush will be judged harshly by history," Finney said. "I am also afraid that judgment will be deserved."

But critics should be careful about taking aim at Bush, warns David P. Kronmiller of Burbank, California.

"I do not think we should be blaming him for the misery of the last eight years. He is not to blame. We are. You are, the American people. We voted him into office." iReport.com: The Bush paradox

Kronmiller says he voted for Bush in 2000, but not in 2004, adding that he feels Bush is responsible for day-to-day decisions that placed the country in a state he finds unfortunate.

He watched the final presidential news conference and said he thinks Bush should have better addressed the hardships faced by residents who were affected by Hurricane Katrina.

"I learned my lesson in four years," Kronmiller says.

"I think he meant well," Deol said. "I wholeheartedly believe it. In his convictions, he always thought he was doing the right thing. The people elected him. There must have been something people liked." iReport.com: Quotes and commentary

Deol said he thinks Bush should take time out to help the veterans of the war he helped create. Overall, he said, the meaning of the Bush presidency will be defined by those who pick up where he left off.