WASHINGTON (CNN) -- For most Americans, the Bush era is ending not a moment too soon. 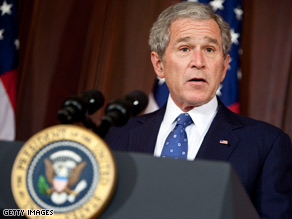 Most Americans are happy President Bush is leaving the White House.

Asked their view of President Bush at the end of his presidency, 75 percent said they are glad he is leaving, according to a CNN-Opinion Research Corporation poll taken in December. Only 23 percent said they will miss him.

It's been like a failed marriage. Things started out well. When President Bush first took office, more than 60 percent saw him as strong and decisive.

That impression was re-enforced after the September 11, 2001,attacks when the president stood at Ground Zero and declared, "The people who knocked these buildings down will hear from all of us soon.''

Bush's image of resolve got him re-elected in 2004, when terrorism was the dominant concern. More than 60 percent of Americans continued to see Bush as strong and decisive when he started his second term in 2005.

No more. There is a fine line between resolve and stubbornness, and Bush seems to have crossed it.

Bush did once have a reputation as a good manager (61 percent in 2001). Then came Hurricane Katrina in 2005. And Bush's reputation as a manager got blown away. Last month, only 25 percent said he has managed government effectively.

View a timeline of key moments in Bush's presidency »

Bush got elected on a promise. "I think that people look for someone who is a uniter, not a divider,'' he said when he first ran for president.

But the vast majority of Americans now think he betrayed that promise. Only 17 percent now believe Bush united the country.

"I think one of the big disappointments of the presidency has been the fact that the tone in Washington got worse, not better,'' Bush told ABC News. "The tone was rough," Bush said, "and I was obviously partially responsible because I was the president."

"I think historians will look back and they'll be able to have a better look at mistakes after some time has passed,'' Bush said at his final news conference on Monday. "I don't think you can possibly get the full breadth of an administration until time has passed.''

Bush's two signature policies were the war in Iraq and tax cuts. As he leaves office, neither is regarded as a success.

The president argued at his news conference, "When the history of Iraq is written, historians will analyze . . . the decision on the surge."

Americans do acknowledge the security situation in Iraq has improved since Bush sent 30,000 additional U.S. troops.

But public opposition to the war has not budged. More than 60 percent of Americans continue to think the war was a mistake.

Bush also defends his tax policies. "I helped implement tax cuts when I was president," he said, "and I will defend them after my presidency as the right course of action.''

"It's sad to say, but we really went nowhere for almost 10 years after you extract the boost provided by the housing and mortgage boom,'' Mark Zandi, chief economist and cofounder of Moody's Economy.com, told The Washington Post. "It's almost a lost economic decade."

President Bush's response: "I inherited a recession. I'm ending on a recession. In the meantime, there were 52 months of uninterrupted job growth."

Bush is proudest of his steadfast leadership after the attacks of September 11, 2001. Indeed, the trauma of the attacks did bring the country together -- for a while. Exactly one year, to be precise. From September 2001 to September 2002, Democrats, Independents and Republicans all supported Bush.

It came to an end in September 2002, when the Iraq rollout and the midterm election campaign began, and the country's bitter divisions re-emerged.

Bush says he has no regrets. "In terms of the decisions that I had made to protect the homeland, I wouldn't worry about popularity," he advised his successor. "All these debates will matter naught if there's another attack on the homeland. ... The question's going to be, 'Why didn't you do something?' "

That's how President Bush wants to be remembered -- as the president who kept the country safe.