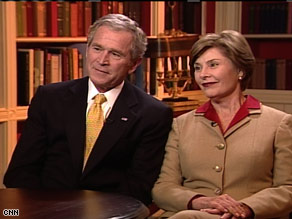 In a wide-ranging interview, the First Family reflects on the past eight years of the presidency, including 9/11 and the war on terror.

They also discussed what awaits President-elect Barack Obama and his family when he takes office on January 20. The following is an edited version of the interview.

Larry King: Are you going to miss it, Laura?

King: Are you anxious to go, Mr. President?

George Bush: I don't know if it's the right word. I'm not sure exactly what I'm going to feel like on January 21. I've been, you know, I've had security briefings -- intelligence briefings nearly every morning for the last eight years. I'll wake up and not have a briefing and realize the responsibility is not on my shoulders anymore.

King: Are there ambivalent feelings?

George Bush: No. I don't think you can be ambivalent. I've been looking forward to the inauguration of Barack Obama. I'll have a front row seat in what is an historic moment for the country.

King: But he was so critical of you. Do you take that personally or you don't?

Laura Bush: I did.

King: Were you angry at it?

Laura Bush: Yes, sort of. George didn't even really know about it because he didn't watch it that much, I don't think.

George Bush: When you make big decisions and tough calls, you're going to get criticized. During the course of this presidency, of course, I've been disappointed at times by the silly name-calling that goes on in Washington.

It's really not necessary that it happened. But I've done my best, though, to make sure I didn't bring the presidency down to that level.

King: How do you feel personally when you see the ratings and the polls that have you at 25, 30 percent?

George Bush: I don't give a darn. I feel the same way as when they had me at 90-plus.

King: Do you ever get the feeling -- and everyone has some doubts about some things -- that, you know, if I was wrong, if Iraq was wrong, then (the troops) died in vain and I sent them?

King: No, but do you ever have a moment of feeling where it was wrong?

George Bush: I was worried Iraq was going to fail, not Iraq was wrong. That's why I put 30,000 troops in when a lot of people were saying, "Get out." The surges worked. A young democracy in the heart of the Middle East has taken hold, and, obviously, there's more work to be done.

King: Reagan once asked this, so we'll ask it, are we better off today than we were eight years ago?

George Bush: One thing is for certain today, we understand the real dangers that we face. Eight years ago, it looked like the world was peaceful and everything was just fine in the economy. Then, we had a recession, then we had an attack and now we've had this financial meltdown.

Everything looked like, on the international front that, you know, radicalism might be, you know, a problem over there, but not here. So one thing is for certain, there's a lot of clarity now on the threats we face.

King: Do you worry?

I think we've forgotten what it was like when we all worried and when a lot of people had anxiety, most people, probably that had watched television that day or had seen what happened.

I mean I think that's because we are more secure today, people are not as worried and they've sort of forgotten what it was like when -- when everyone woke up worried.

George Bush: It made me realize my most important responsibility is to protect the country from attack.

King: It changed you?

George Bush: Yes, it changed me. It changed the country, too. I still have images of those days vivid in my mind. I told the American people I wouldn't tire and I wouldn't falter and I haven't.

Watch Bush talk about aftermath of 9/11 »

King: Are we ever, ever going to find (Osama) bin Laden?

George Bush: Yes, of course. Absolutely. We have a lot of people looking for him, a lot of assets out there. He can't run forever. Just like the people who allegedly were involved in the East African bombings, a couple of them were brought to justice recently.

King: Did we ever come close?

George Bush: I don't know. I can't answer that.

George Bush: I really don't know. I'm not trying to hide anything.

Laura Bush: Well, I would tell her this is a wonderful and grand home. It is a very nice home for a family, and we know that both from having been the children of a president ourselves, and then of course from having Barbara and Jenna here.

Barbara and Jenna took Sasha and Malia on a tour of the White House, showed them all the fun, you know, great things to do. This is a terrific house for hide-and-seek. They showed them how to slide down the ramp from the Solarium. I think those little girls will have a wonderful time living here.

King: Upon reflection, two more things: was Katrina the lowest point beyond foreign entanglements and 9/11.

George Bush: I think being called a racist because of Katrina was a low point. I can remember people saying George Bush is a racist because of the response, when, in fact, the truth of the matter is the response was pretty darn quick, if you think about the fact that the Coast Guard and a lot of brave kids were pulling 30,000 people off of roofs as soon as the storm passed, as soon as they found people on those roofs.

King: But a lot of mistakes happened too.

George Bush: Well, yes, at all levels of government, absolutely.

King: Do you think those mistakes, that we learned from them?

George Bush: No question. That's a good thing about government. By the way, we have had eight hurricanes, major hurricanes, and seven and a half were dealt with the way everybody expected them to be dealt with. The Mississippi part of Katrina was dealt with well, even though it was a really horrible hurricane.

King: I know you will be talking Thursday. Anything you want to say?

George Bush: I want to say it has been a huge honor to be president. I have enjoyed it. I've been amazed at the character of the American people.