Bush: I would have done some things differently

WASHINGTON (CNN) -- In his final public address from the White House, a reflective President Bush on Thursday recalled the ups and downs of his eight-year tenure and said he was willing to make the tough decisions. 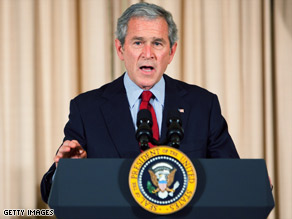 President Bush touts what he considers his foreign policy achievements Thursday at the State Department.

"I have followed my conscience and done what I thought was right. You may not agree with some tough decisions I have made. But I hope you can agree that I was willing to make the tough decisions."

Bush, who as president has become known for adamantly sticking to positions even when they've come under criticism, acknowledged setbacks and said he would have done some things differently.

"Like all who have held this office before me, I have experienced setbacks," Bush said. "There are things I would do differently if given the chance. Yet I have always acted with the best interests of our country in mind.

Bush also said he is "filled with gratitude," and characterized Obama's inauguration as a "moment of hope and pride for our whole nation."

Bush predicted a bright future. "We have faced danger and trial and there is more ahead," Bush said. "But with the courage of our people and confidence in our ideals, this great nation will never tire, never falter and never fail."

Recalling the defining moment of his presidency, Bush said the September 11, 2001, attacks forever altered the way he approached his job.

"As the years passed, most Americans were able to return to life much as it had been before 9/11," Bush said. "But I never did." iReport.com: Share your thoughts on Bush's farewell

"Every morning, I received a briefing on the threats to our nation. And I vowed to do everything in my power to keep us safe," he said.

He cited the creation of the Department of Homeland Security and changes in the military and intelligence communities as part of the reason the United States has not seen another significant terrorist attack since 2001.

"There is legitimate debate about many of these decisions," he said, an allusion that could refer to constitutional challenges to the administration-backed U.S. Patriot Act, controversy over the U.S. detention center at Guantanamo, Cuba, and the decision to invade Iraq before Osama bin Laden and al Qaeda had been vanquished in Afghanistan.

"But there can be little debate about the results -- America has gone more than seven years without another terrorist attack on our soil."

He warned that America's "enemies are patient, and determined to strike again" and urged against isolationism and protectionism in the face of economic and other challenges from abroad.

As he exits the world stage, Bush's approval rating, battered by a tanking economy and an unpopular, lingering war in Iraq, hovers just above all-time lows. A USA Today/Gallup poll released Wednesday indicates that, even with a 5-point "lame duck bounce" from last month, only 34 percent of Americans approve of the job he's doing as president.

The roughly 13-minute address was delivered in front of about 40 people "with stories to tell" invited by the White House. Bush mentioned several -- from the principal who opened a New Orleans, Louisiana, charter school in the wake of Hurricane Katrina to a Marine sergeant decorated for charging into an ambush to rescue three of his comrades.

The presidential farewell address is a tradition dating to George Washington's departure from office in 1797. Presidents Eisenhower, Reagan, Carter and Clinton -- among others -- all delivered farewell speeches.