Officials: 2 million to show up to see Obama being sworn in

WASHINGTON (CNN) -- Based on their latest estimates, congressional officials organizing next week's presidential inaugural expect 2 million people to brave extra-long security lines in the bitter cold to witness Barack Obama being sworn in as the first African-American U.S. president. 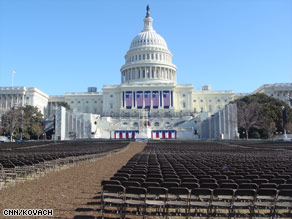 The inaugural committee will set up 28,000 chairs for ticket holders to watch Barack Obama's swearing-in.

"Hopefully, people will be of good temper and willing to go through the lines it will take," said Sen. Dianne Feinstein, D-California, who chairs the congressional committee organizing inaugural events on Capitol Hill. "Because they are going to have to go through magnetometers and they are going to be wanded. Unfortunately, that's the nature of the time."

Forecasts show the high temperature on Inauguration Day will be 30 degrees Fahrenheit (-1 Celsius).

Speaking with other officials at a news conference Friday previewing the inaugural festivities, Feinstein warned that people will have to walk long distances to get to the event and should plan to arrive early.

Watch where to go if you don't have a ticket »

"Most people will be standing for a substantial period of time, and be sure you can do it," she said. "People have to be prepared to handle very cold weather, especially if the wind comes up." iReport.com: Send your photos from the inauguration

She suggested people not bring infants or children unless they are of an "age and durability" to withstand the cold over a long period of time.

"Be very careful if you're planning to bring your children, cause it's not going to be easy," she said, speaking as a mother and grandmother.

Contingency plans exist to move the swearing-in inside the Capitol if the cold becomes "life-endangering," according to Howard Gantman, who works for Feinstein. "But in view of the large number of people, there's a strong intent to do this outside," he said.

Crowd estimates are down from an original prediction from District of Columbia officials that as many as 4 million people would crowd the Capitol grounds and the National Mall to see the event. The new figures, based on fresh surveys of charter bus companies, show far fewer are coming than initially thought.

Feinstein ticked through other facts and figures about the event:

The elite few who are invited to that lunch will enjoy a three-course meal featuring wines from Feinstein's home state of California, she said.

The first course will be "seafood stew served with Duckhorn Vineyards, 2007 Sauvignon Blanc, Napa Valley." That will be followed by "a brace of American birds (pheasant and duck), served with sour cherry chutney and molasses sweet potatoes; served with Goldeneye, 2005 Pinot Noir, Anderson Valley."

Feinstein said she and a small group of senators' wives, and Nancy Erickson, the secretary of the Senate, chose the menu after a competition of the "very best that the Washington catering establishment has to offer."

Over the head table at the lunch will hang an 1865 painting, "View of the Yosemite Valley," by American artist Thomas Hill. The picture is on loan from the New York Historical Society.

The swearing-in ceremony itself won't change from previous inaugurals, Feinstein said. She and her staff studied DVDs of past ceremonies "so everything is according to historical procedure."

She said the ceremony is "scripted, and it is concise and it moves quickly."

Feinstein's Senate office received more than 60,000 requests for inaugural tickets. But, as a senator, she was allotted just under 300 to give out. House members get just under 200.

She said everyone she is giving a ticket to must pledge not to sell the ticket for a profit.

As chairman of the inaugural committee, Feinstein will make "very formal and very brief" introductions for all the speakers at the inauguration.

Asked if she would have trouble introducing Pastor Rick Warren -- who will deliver the invocation -- with whom she disagrees politically on some issues such as gay rights, she said no.

"This is not a political event," she said.

Feinstein was also asked to sum up her feelings about the first African-American being sworn in as president.

"For me, that's going to be the most amazing part," she said. "I'm going to look out at the Lincoln Memorial as Barack Obama takes the oath of office. I'm going to think back into our history 200 years and what America was like at that time, especially for African-Americans. And then to realize that we've gone from the monument to the White House in that 200 years. And the doors are open. And we have a bright, young, energetic president who happens to be African-American, and the American people are rejoicing."