Obama says he always thought Bush was a 'good guy'

BEDFORD HEIGHTS, Ohio (CNN) -- After two years of traveling around the country and criticizing President Bush, President-elect Barack Obama said Friday that he "always thought [Bush] was a good guy." 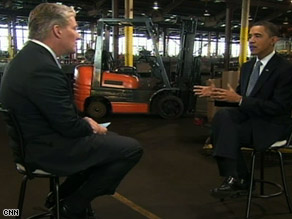 Barack Obama tells CNN's John King that it was "tough" for him to request the additional bailout funds.

"I mean, I think personally he is a good man who loves his family and loves his country," Obama said in an exclusive interview with CNN's John King.

During the election season, Obama frequently campaigned against what he called Bush's "failed policies" and promised a "clean break" from the past eight years.

Asked if there was anything he wanted to take back, now that he has spent more time with the president, Obama praised Bush's team for helping with a smooth transition and said part of what America is about is being able to have "disagreements politically and yet treat each other civilly."

Obama also said he thought Bush made "the best decisions that he could at times under some very difficult circumstances."

"That does not detract from my assessment that over the last several years, we have made a series of bad choices and we are now going to be inheriting the consequences of a lot of those bad choices," Obama said.

In addition to his relationship with Bush, Obama also discussed some key issues that he will face in the first days of his administration, including national security and the economy.

Even before taking the oath of office, Obama has already faced a showdown with Congress over releasing what remains of the $700 bailout bill that Bush and Congress authorized before the election.

The $350 billion that the Senate approved will come with specific conditions, Obama said.

"There's nothing wrong with us placing some conditions, making sure that the money's not going to executive compensation, making sure you're not seeing big dividend payoffs to shareholders and making sure that money is being left so that we can get credit flowing again, not just for individual homeowners who are losing their homes, but also small businesses who are the lifeblood of this economy.

"If they can't get credit, then they end up having to shutter their doors. And when they shutter their doors, people lose jobs. They then can't pay their mortgage, and you start down the road that we're on. We want to reverse that path, and that means that's the way we use the next $350 billion that Congress voted on, and that was a very tough vote for a lot of people. And it was tough for me to have to request it," he said.

Obama sat down with King after he took a factory tour in Bedford Heights, Ohio.