WASHINGTON (CNN) -- A national poll suggests that President-elect Barack Obama is more popular than ever despite recent speed bumps on the road to his inauguration. 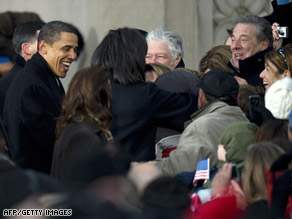 The CNN/Opinion Research Corp. survey released Sunday also indicates that most Americans see Obama's inauguration as a chance for the nation to come together.

The rise in approval also comes after a series of missteps in the Obama transition over the past few weeks: the announcement by New Mexico Gov. Bill Richardson that he was withdrawing from his nomination as commerce secretary after news of a federal grand jury investigation in his home state; the disclosure of Treasury Secretary-designate Timothy Geithner's failure to pay $34,000 in taxes; and pushback by Republicans and even some Democrats to Leon Panetta's nomination as CIA director.

"If the public is blaming Obama for those missteps, it isn't registering in his approval rating," CNN polling director Keating Holland said. "You know the country is in the middle of a honeymoon when six in 10 Republicans have a positive view of Obama."

The poll also indicates that six in 10 Americans think Obama's inauguration will be a celebration in democracy. Only four in 10 felt that way when George W. Bush was inaugurated as president eight years ago.

The poll also suggests that those surveyed see Obama's inauguration as a chance for the country to come together, rather than a political celebration, Holland said.

Thirty-nine percent of those questioned feel that Obama's Inauguration is a celebration by supporters of the winning candidate, 33 percentage points lower than those who felt the same way about Bush's 2001 inauguration.

"The public saw both of Bush's inaugurations as celebrations just for his supporters," Holland said.

The poll also suggests that 68 percent of those questioned are personally "thrilled or happy" that Obama will soon be inaugurated as president, 18 points higher than the way people felt in the days before President Bush's second inauguration four years ago.

Expectations for Obama's speech Tuesday appear to be quite high, with 85 percent predicting that his speech will be excellent or good. That's 24 points higher than the 61 percent who felt the same way about Bush's first inauguration speech in 2001.

Nine out of 10 African-Americans questioned in the poll say Obama's election is a dream come true. Six in 10 also say they're thrilled by Obama's impending inauguration. Only a quarter of white respondents feel the same way.

"But there is a note of caution that tempers blacks' enthusiasm about an Obama presidency," Holland said. "Most of them say the American public will hold Obama to a higher standard than past presidents because he is black. Most whites say that Obama's race will not matter in how he will be judged as president."