WASHINGTON (CNN) -- Sen. Edward Kennedy will spend the night in a Washington hospital after suffering a seizure Tuesday afternoon during a luncheon for President Barack Obama. 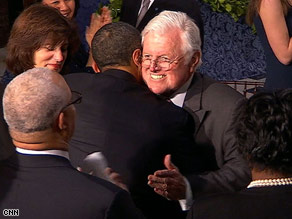 President Obama greets Sen. Edward Kennedy at the luncheon in the Capitol.

Doctors believe the incident was brought on by "simple fatigue," said Dr. Edward Aulisi, chairman of the neurosurgery department at Washington Hospital Center.

"Sen. Kennedy is awake, talking with family and friends, and feeling well. He will remain at the Washington Hospital Center overnight for observation, and will be released in the morning," Aulisi said in a statement.

Paramedics were called to the Capitol's Statuary Hall at 2:35 p.m. Kennedy, 76, was taken by ambulance to Washington Hospital Center.

At the hospital, Sen. John Kerry, D-Massachusetts, said Kennedy was alert and in good spirits.

"He has his Irish up," Kerry said. "Ted Kennedy is going to be back in the Senate fighting for the things he cares about."

Kennedy had a mild seizure, Kerry said. He quoted Kennedy's wife, Vicki Kennedy, as saying, "It just goes with the territory."

A Republican House member at the luncheon said Kennedy, D-Massachusetts, was still experiencing seizures when he was put in a wheelchair and taken out through the Rayburn room, located to the side of Statuary Hall. The incident happened at the end of lunch.

Obama mentioned Kennedy's condition while speaking at the luncheon.

Kennedy "was there when the Voting Rights Act passed," the new president said. "Along with John Lewis, [Kennedy] was a warrior for justice. And so I would be lying to you if I did not say that right now, a part of me is with him. And I think that's true for all of us. This is a joyous time. But it's also a sobering time, and my prayers are with him and his family and [his wife] Vicki."

Obama "seemed very, very concerned," and went to the area Kennedy was seated, said Sen. Patrick Leahy, D-Vermont. "He spoke to others and asked for a moment of silence."

Former Vice President Mondale said he was sitting with Kennedy at their table, that he was doing fine when all of a sudden Kennedy started to convulse.

Kennedy's wife was with him, Dodd said. "She knows what to do. He's in good shape."

Hatch said he told Kennedy, " 'Teddy you're going to be all right.' "

"This is a person who cares about history. He wouldn't have missed this for the world."

The senior Massachusetts senator, patriarch of one of American's leading political families, is a staunch supporter of Obama.

See a closer look at Kennedy »

In May, Kennedy suffered a seizure while walking his dogs at his home in Hyannisport, Massachusetts.

Three days later, Kennedy's doctors at Massachusetts General Hospital in Boston, Massachusetts, said the preliminary results from a brain biopsy showed a tumor in the left parietal lobe, which was responsible for the seizure.

In June, Kennedy underwent a 3½-hour operation at Duke University Medical Center in Durham, North Carolina, to remove a malignant tumor from his brain. Surgeons reported the surgery was a success and that Kennedy should suffer no permanent damage from the procedure.

Kennedy's follow-up treatment plan was to include radiation and chemotherapy.

Though his own attempt to seek the presidency failed, Kennedy built a reputation as one of the most effective lawmakers in the Senate.

Kennedy had surgery in October 2007 to clear his carotid artery in hopes of preventing a stroke. Until the seizure last year, the powerful Democrat appeared in fine health. He suffers chronic back pain from injuries suffered in a 1964 plane crash.

Also during the luncheon, Sen. Robert Byrd, D-West Virginia, appeared to be experiencing some difficulty.

Byrd, 91, was very upset and distraught over the incident involving Kennedy, a spokeswoman said. She noted, however, that Byrd later recovered and returned to his Senate office.