WASHINGTON (CNN) -- Barack Obama launched his presidency before an estimated 1.5 million people on the National Mall on Tuesday with somber yet confident tones, saying the country will overcome its serious economic and international challenges. 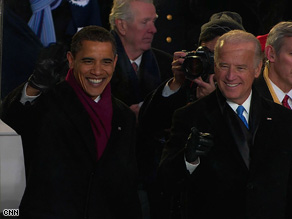 "Today I say to you that the challenges we face are real," Obama said in his inaugural address. "They are serious, and they are many. They will not be met easily or in a short span of time. But know this, America: They will be met."

Obama's tempered optimism, however, was bookended by celebration in the Mall and across the country for the inauguration of the country's first African-American president.

"This is America happening," said Evadey Minott, a Brooklyn, New York, resident who witnessed the inauguration.

"It was prophesized by King that we would have a day when everyone would come together. This is that day. I am excited. I am joyful. It brings tears to my eyes." Read reactions of people at inauguration, parade

Obama's address came before a crowd that had been building since 4 a.m. Tuesday down the National Mall. People sang, danced and waved flags as his swearing-in approached.

See the inauguration of Obama »

Many in the crowd seemed moved as Aretha Franklin belted out a rousing version of "My Country 'Tis of Thee" before Joe Biden was sworn in as vice president. See, zoom in on satellite image of inauguration crowd

Wearing a navy suit and red tie, Obama repeated the oath of office, his hand on the same Bible used in President Abraham Lincoln's first inauguration.

When Obama took the podium, however, the jubilant crowd grew somber and quiet, hanging on his every word. There was only scattered applause -- punctuated by an occasional "That's right" or "Amen."

Obama thanked those who sacrificed so much so "a man whose father, less than 60 years ago, might not have been served at a local restaurant can now stand before you to take a most sacred oath."

He promised to end petty squabbles on Capitol Hill, bring "old friends and former enemies" into the fold, and invoked the Bible, saying, "The time has come to set aside childish things."

He also vowed to leave Iraq to its people, responsibly, and to finish forging "a hard-earned peace" in Afghanistan. To Muslims, he promised "a new way forward, based on mutual interest," and to terrorists, he leveled a threat: "You cannot outlast us, and we will defeat you."

The challenges are daunting, he said, but anyone who underestimates this nation has forgotten about its past perseverance. Rate Obama's speech

"Greatness is never a given. It must be earned," he said.

His words resounded with spectators and revelers who let out deafening cheers after his address. Spectator L.J. Caldwell likened Obama to some of the most heroic figures of the civil rights movement.

"When you think back, Malcolm [X] fought, then we come a little further. Rosa Parks sat, then come up a little further, and [the Rev. Martin Luther King Jr.] spoke. Then today, President Obama ran and we won," said Caldwell, of Somerset, New Jersey.

Celebrations weren't limited to Washington. Across the country, friends and strangers gathered on the streets and in schools, bars and auditoriums to witness Obama's inauguration, united in their hope that he will deliver on his promise of change.

In New York's Bronx borough, students huddled in the halls of a school to watch the ceremony on a projection screen.

"They were cheering; they were clapping; they were in awe because everything we had talked about, they were able to see," teacher Marta Rendon said. Read reactions of people across the country

Leaders around the world offered their congratulations. French President Nicolas Sarkozy said the United States expressed "its resolve to have an open, new, strong and caring America."

Australian Prime Minister Kevin Rudd said Obama is "the hope of our time." Read reactions from across the world

After Obama's address, hundreds of thousands remained on Washington's National Mall as Obama entered the Capitol and signed his first documents as the 44th president of the United States. Among those were his Cabinet nominations. The Senate approved most of those nominations later in the day.

Obama then lunched with lawmakers at the Capitol's Statuary Hall, telling them, "What's happening today is not about me. It is about the American people."

Later, Obama's motorcade carried him past barricaded crowds along Pennsylvania Avenue toward the White House. He and his family watched the rest of the parade in a reviewing stand outside the White House. The president and first lady then began the rounds of 10 official inaugural balls scheduled over the course of the evening.

Read about the first couple dancing the night away »

Many said before the festivities that they did not have tickets and would be happy to catch a mere glimpse of the nation's first African-American president. Some spectators were more than a mile from the swearing-in ceremony, watching on giant TV screens erected along the National Mall.

At St. John's Episcopal Church, where the Obamas kicked off a packed day, 9-year-old Laura Brueggeman waited with her mother, Wendy, and father, Jeff, of Bethesda, Maryland. The affable crowd tried to let shorter onlookers and children to the front for better views.

"I want to see Obama. I think that would be really cool. I could tell all of my friends that I got to see him," the youngster said.

Security was tight in Washington. However, no arrests related to the inauguration were reported as of Tuesday evening, an FBI spokesman said.

"It's beyond the dream. We're just here feeling it with the throngs of people. It's amazing grace personified," Oprah Winfrey said, sitting next to actor Samuel L. Jackson.

As Obama and his wife, Michelle, made their way to the White House, they stepped out of their limousine amid another round of boisterous hoorahs.

The first couple beamed as they walked down Pennsylvania Avenue, waving to the throngs kept back by police barriers. They walked a few blocks before returning to their vehicle to finish the two-mile parade that took them to the White House.

"I have a sneaky suspicion that Barack and Michelle will be out and about on the streets of Washington [during his term]. ... You'll see them again," said Tracy Miller, who was watching the Obamas.

After arriving at the White House, Obama and his family watched the rest of the inauguration parade from a reviewing stand.

Watch Obamas take in the parade »