LONDON, England (CNN) -- Guantanamo Bay's legacy of torture will hurt the United States even if President Obama makes good on a pledge to close the prison camp, a former inmate says. 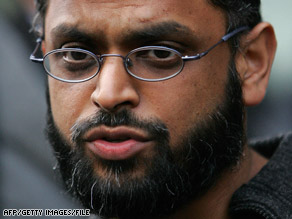 Moazzam Begg says that during intense interrogations at Guantanamo Bay, he would have confessed to anything.

Justice will be impossible to mete out to the alleged terrorists and war criminals held there because any confessions must be tainted by the methods used to obtain them, ex-prisoner Moazzam Begg told CNN.

Begg says he would have confessed to anything during interrogations while he was held at Guantanamo for nearly three years.

"What procedure can you use on people who have been systematically tortured including waterboarding, including being stripped naked and beaten? What sort of evidence can be admitted into a court of law that has been extracted under that process?" asked Begg.

Watch what Begg thinks of Guantanamo »

The new administration has said that waterboarding, which causes the feeling of drowning, is torture.

Begg, who is British, was captured during the war in Afghanistan and accused of aiding the Taliban regime. His family has always maintained he was a victim of mistaken identity. He was sent back to his home in Britain by the Bush administration in 2005 and never prosecuted.

President Obama on Wednesday moved closer to making good on his campaign promise. The administration is drafting executive orders calling for the detention facility's closure, officials said. Earlier in the day, a judge granted Obama's request for a 120-day suspension of prosecutions so a review of all cases of suspected terrorists could take place.

During his inaugural speech, he stressed that ideals of justice did not need to be thrown out to ensure the nation's safety.

"Our Founding Fathers, faced with perils we can scarcely imagine, drafted a charter to assure the rule of law and the rights of man, a charter expanded by the blood of generations. Those ideals still light the world, and we will not give them up for expedience's sake," Obama said.

Watch what could be next for Guantanamo »

Legal issues are already complicating the cases of some of the most important terror suspects, like Mohamed al-Qahtani, the so-called 20th hijacker, who has been accused of helping to plan and possibly participate in the September 11, 2001, terrorist attacks.

Earlier this month, the retired judge in charge of determining which Guantanamo detainees should be tried by a U.S. military commission told The Washington Post that al-Qahtani was tortured and therefore could not be put forward for prosecution.

"Guantanamo Bay is the most notorious prison on earth," Begg said. He said he believes Guantanamo is a radicalizing force for militants around the world.

Looking beyond high-profile suspects, human rights campaigners say there is little evidence to prosecute dozens of Guantanamo inmates still being held. They argue that keeping those detainees locked up will not help keep al Qaeda at bay.

"I think it's actually one of the most harmful myths about it, that we can't let people go because we've got the tiger by the tail," said Cori Crider of the human rights organization Reprieve.

Chris Arendt, a former guard at Guantanamo Bay, says the Obama administration must rethink and reform the way it detains and prosecutes future terror suspects -- and do more than just close Guantanamo.

"We're focused on this one camp that has become the star of the whole show. But there are camps everywhere," he said.

"There are camps in Iraq, in Afghanistan -- every country that American or the coalition forces have set their feet. None of those detainees are seeing any justice."