(CNN) -- Everyone was blogging about Tuesday's inauguration -- even the people who were putting it on. 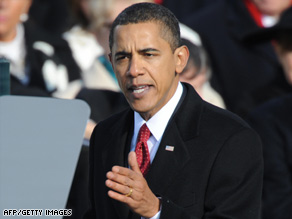 Fittingly for an election campaign that was won partly by galvanizing millions of young people to get out and vote via the Internet, Obama's inauguration ushered in a new digital age for the U.S. presidency.

As the clock struck 12.01 in Washington Obama's administration took control of the White House Web site, with the simple words "Change has come to America."

The first blog post by director of new media for the White House, Macon Phillips, said: "Millions of Americans have powered President Obama's journey to the White House, many taking advantage of the Internet to play a role in shaping our country's future."

It was an unprecedented move in the history of presidential inaugurations and it reflected the mood of the blogosphere, which came alive with comments as excitable bloggers mulled on topics ranging from what Michelle Obama would wear to their thoughts on Obama's speech.

The New Yorker's George Packer wrote in his blog that "President Obama uttered no words today that will be quoted in a hundred years."

"He delivered something better than rhetorical excitement -- he spoke the truth, which makes its own history and carries its own poetry," Packer added.

But it was not just traditional bloggers who were giving their two cents worth. Social network sites were also buzzing with the excitement of the occasion.

CNN.com provided a live video streaming platform for Facebook users to interact with the inauguration ceremony by updating their status as they watched proceedings.

Online viewers could choose between their friends or "everyone watching," seeing live thoughts such as "I've actually got shivers!" to "Barack H.? What a copout!"

Many were captivated by Aretha Franklin's eye-catching hat, with comments ranging from: "Now that's a hat," to "Aretha is wearing the hell outtta that hat."

There was also no escaping the ubiquitous "Tweeple" (Twitter people) posting 'tweets' on everything from their opinion of the inaugural speech to their celebrity spots.

One 'tweeter' even blogged about using the VIP toilets at the inauguration site in Washington, saying: "Just used the VIP porta potty. Contrary to what they might tell you, fancy people's **** does indeed stink."

More than 40,000 photos of the events on Capitol Hill tagged with the word "inauguration" were also posted to the photo-sharing site, Flickr.

No aspect of the inauguration was left undissected, but Pastor Rick Warren's invocation prayer proved a hot topic amongst bloggers, who by turns criticized him for being too inclusive and not inclusive enough.

Warren attracted some criticism for using words from the Jewish, Christian and Muslim holy texts as well as including the name of Jesus -- in several languages including Hebrew.

"For me, the two most salient features of the Rev. Rick Warren's inauguration invocation were its emphasis on the values of unity and mutual respect, which seemed partly a reaction to the controversy his selection as invocation speaker sparked, and its bold invocation of Jesus in the form of the Lord's Prayer.

"For some, those two themes would seem incongruous. It was trademark Warren, who -- like Barack Obama -- has been accused of trying to be all things to all people."

For some, it was about looking ahead to how long the adulation for President Obama would last.

Conservative blogger Dr. Melissa Clouthier, who was liveblogging the inauguration, debated that the "Obasm" would last 4 years.

"His voters voted for him not for his ideas," she wrote. "He didn't really articulate specific plans. He just gave vague promises. Voters were so enamored with the idea of him and he'll be around for four years, so the love will continue.

"The Press and the voters, too, imbued Obama with so much wonderfulness that to turn on him is to turn on their own perfect judgment. Since the vote was essentially narcissistic and people don't hate themselves, Obama will be loved for a good long time."

It remains to be seen whether her prediction will come true.