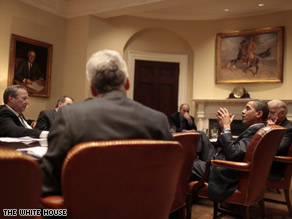 Members of the National Economic Council brief President Obama on the economy Wednesday.

"Transparency and the rule of law will be the touchstones of this presidency," Obama said.

In his first full day in office, Obama touched upon many of the major issues facing his administration, and even carved out time to retake the oath of office.

The move was aimed at dispelling any confusion that might arise from Tuesday's oath, which Chief Justice John Roberts flubbed by mixing up the order of the words.

The do-over was also intended to erase any questions regarding the legitimacy of Obama's presidency, although per the Constitution, Obama became president at noon Tuesday without taking the oath.

Earlier in the day, Obama said he would issue a pay freeze for his senior staff members.

The new president has also promised swift action on the beleaguered economy. House Democrats, at Obama's urging, have signed an $825 billion economic recovery package that the president says will save or create up to 4 million jobs and invest in health care, energy and education.

House Republican leaders, however, asked to meet with Obama on Thursday to offer major changes to the recovery proposal.

"The challenge as we see it is to create a plan that helps middle-class taxpayers and small businesses without wasting money or exploding our national deficit," the leaders wrote in a letter to the new president.

Rep. Paul Ryan, the top Republican on the House Budget committee, argued that the main tax provision in the Democrats' plan -- cutting payroll taxes -- was not an effective way to jump-start the economy.

House Republican Conference Chairman Mike Pence declined to say whether the Democrats' package would get any Republican support if it didn't change significantly.

Obama began the day with a moment of solitude in the Oval Office. When he arrived, he spent 10 minutes alone there, reading a note left for him on a desk by outgoing President George W. Bush.

On Sunday, Israel and Palestinian militants declared a cease-fire after 22 days of fighting in Gaza.

First lady Michelle Obama joined her husband in the Oval Office at 9:10 a.m., shortly before the first couple departed for the National Prayer Service at Washington National Cathedral.

Later in the day, Obama and the first lady greeted those who came to the White House for a formal open house. Obama joked, "Don't break anything."

Obama also met with his economic team and top brass from the Pentagon. iReport.com: What do you think Obama should do first?

Later in the afternoon, he met with the Ambassador to Iraq, the commander in Iraq, and the "theater commander" in the region for an update on the situation in Iraq.

"The meeting was productive and I very much appreciated receiving assessments from these experienced and dedicated individuals. During the discussion, I asked the military leadership to engage in additional planning necessary to execute a responsible military drawdown from Iraq," he said in a statement.

"In the coming days and weeks, I will also visit the Department of Defense to consult with the Joint Chiefs on these issues, and we will undertake a full review of the situation in Afghanistan in order to develop a comprehensive policy for the entire region," he said.

He plans to tell the top U.S. officers that he wants them to plan to have combat forces out of Iraq in 16 months, as he promised during his election campaign, an adviser said.