(CNN) -- Newspaper front pages around the world were unanimous Wednesday in celebrating the momentousness of Barack Obama's inauguration as U.S. president. 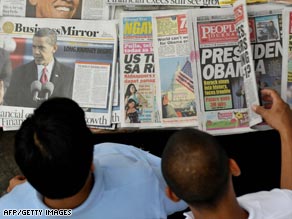 "Let's rebuild America," said the front page of France's Le Figaro, over a photograph of a smiling Obama swearing the oath of office. "The Promise," said Liberation, hailing the "United States of Obama."

"Remaking America," said the Daily Telegraph in the UK -- a theme carried by many other newspapers worldwide -- while the Daily Mirror preferred: "Reborn in the USA."

The Sun showed a picture of Obama's seven-year-old daughter Sasha giving her father the thumbs-up with the headline: "You're the Daddy."

"At last it was the day, the hour, even the second that millions of Americans, and not just Americans, have waited for impatiently ever since November, and in many cases for much longer than that. The crowds in Washington were extraordinary evidence of the momentous public potency of the moment," the Guardian gushed in its editorial. Look at mosaic of newspapers marking inauguration

Many international newspapers focused on the powerful symbolism and unifying power of the arrival of an African-American U.S. president on the world stage.

"We're a nation of Christians and Muslims, Jews and Hindus -- and non-believers," said the headline on the front of the Times of India, taking a line from Obama's inaugural address.

Japan's Asahi Shimbun said: "He is expected to play the leading role in changing the world in which racial and religious confrontations continue to rage in defiance of the ideal expressed in the Universal Declaration of Human Rights."

"He is as much symbol as substance, an icon for the youth and a sign of deliverance for an older generation that never believed a man with his skin color would ascend those steps," said the International Herald Tribune.

But many papers urged Obama to get to work immediately to address the urgent problems already piled up up in his intray.

"This wasn't the occasion for his most soaring of speeches. It was instead an oration rooted in the immediate challenges. It was directed at two audiences: a hopeful but anxious one at home, and an uncertain but hopeful one overseas," the UK's Times said.

Speaking of the economic problems on a scale not seen since the Great Depression, China's Xinhua said: "Like Franklin Delano Roosevelt and Ronald Reagan, Obama, the new president, will get a rare opportunity to leave a sweeping and long-lasting imprint on the U.S. economy."

The Times of India called on Obama to continue the so-called "war on terror" by pursuing Pakistani-based militant groups, such as Lashkar-e-Taiba which New Delhi blames for last year's terror attacks in Mumbai.

"For the sake of the world's security, Obama must press Islamabad to clamp down on these groups and close down their bases, something that the Bush administration failed to do for most of its run."

Meanwhile, Germany's Der Spiegel sounded a note of caution about the weight of expectation now resting on Obama's shoulders: "The catchword of the election campaign was 'change.'The new message to his followers is: 'Be patient.'"

And there was little lament for the passing of the presidency of Obama's controversial predecessor, President George W. Bush.

"He entered the White House promising to heal division by being a 'uniter, not a divider.' He leaves it today as one of the most divisive and least popular presidents in US history," the South China Morning Post said.

For Obama, according to the UK's Independent, the challenge in office will be to strike a balance between the "poetry" of his campaign for election and the tough "prose" of government.

"Beautiful rhetoric alone cannot change the world. So perhaps the most encouraging aspect of the address was the new President's willingness to spell out the scale of the problems facing America and the "hard choices" that lie ahead for him and the country," the paper said.

"An old American aphorism has it that politicians campaign in poetry, but govern in prose. We can be sure that the poetry will continue to flow from an orator as gifted as President Obama. But now begins the difficult task of getting the prose right too."