Amid protests, Obama backs 'right to choose' on Roe anniversary

WASHINGTON (CNN) -- President Obama affirmed his support for a woman's "right to choose" on Thursday, the 36th anniversary of the Supreme Court decision that led to the legalization of abortion, as thousands of anti-abortion activists descended on the National Mall to challenge his position. 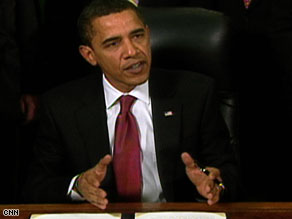 Roe v. Wade "not only protects women's health and reproductive freedom, but stands for a broader principle: that government should not intrude on our most private family matters," Obama said in a statement.

The landmark 1973 decision held that a woman's right to abortion was protected by the right to privacy under the Constitution's 14th Amendment, voiding most state laws against abortion at the time.

Nellie Gray, who helped organize the anti-abortion March for Life on the Mall, invited Obama to speak at the rally.

"America needs your strong leadership as president of all the people to stop the intentional killing of an estimated 3,000 pre-born boys and girls each day and the brutalizing of mind, heart and body of pregnant mothers."

Kim Gandy, president of the National Organization for Women, said she believes that while abortion should remain an option, increasing the availability and affordability of birth control and reducing the number of unwanted pregnancies is the real solution.

"I think what everyone ought to be interested in doing, whether they are or not, is reducing the number of unwanted pregnancies," Gandy told CNN. "Because if we reduce the number of unwanted pregnancies, it will by definition reduce the number of abortions and reduce a lot of the pain and despair that has befallen women in these economic times, who cannot afford to enlarge their families when they don't have a job and they don't have a way to put food on the table for the kids that they have now.

"If we could all work together to reduce the number of unwanted pregnancies, it would dramatically change the debate on this issue."

Obama has so far not struck down rules reinstated by the Bush administration eight years ago, prohibiting U.S. money from funding international family planning groups that promote abortion or provide information, counseling or referrals about abortion services.

The "Mexico City policy" was initially put in place by President Ronald Reagan and suspended during Bill Clinton's presidency. Its opponents refer to it as the "global gag order."

About 20 anti-abortion rights lawmakers spoke at the rally Thursday, pushing for a renewed effort to overturn Roe v. Wade.

"And the next question is, " he continued, "President Obama, when did your life begin?"

Other legislators detailed their plans to keep the issue on the table in Congress and on the minds of voters.

Rep. Jean Schmidt, R-Ohio, told the crowd she plans to introduce what she calls the "Juno Bill," referencing the hit 2008 film of the same title in which a high school teenager gives her baby up for adoption.

Throughout the rally, speakers urged bold action for their cause.

Gandy said the fight will also continue on the pro-abortion rights side.

She said the number of unwanted pregnancies is rising, as congressional action has increased the cost of contraception for college students and low-income women, "something we hope this administration will reverse."

Two pieces of federal legislation are pending, she said. The first will expand accessibility and availability of birth control, and the second, the Freedom of Choice Act, is a codification of Roe v. Wade. NOW will continue pursuing both at the congressional level, she said, but noted that even though Congress has a Democratic majority, it does not have a pro-abortion rights majority.

"So that will continue to be an uphill battle," she said

All About Abortion • National Organization for Women • Barack Obama