Editor's note: In our Reporter's Notebook series, CNN correspondents reveal stories behind the news. Here, senior White House correspondent Ed Henry describes how a story can change in a moment. 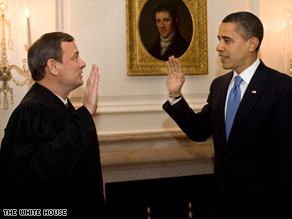 President Barack Obama takes the oath of office -- his second in two days -- in the White House on Wednesday.

WASHINGTON (CNN) -- What a long, strange trip Barack Obama's first full day as president turned out to be.

He began the day pushing for more transparency in government, only to end it by keeping TV cameras out when Chief Justice John Roberts re-administered the oath of the presidency.

All this started at Obama's historic swearing-in on Tuesday, where Roberts flubbed a line in the oath of office, leading to this comical scene, via transcript at CNN.com:

Roberts: ... that I will execute the office of president to the United States faithfully ...

Roberts: ... the off -- faithfully the pres -- the office of president of the United States.

Obama (at same time) ... the office of president of the United States faithfully.

But many legal experts pointed out that Obama became president at noon on Tuesday, regardless of whether the oath was off or not.

So I didn't think too much of the story until about 7:20 p.m. on Wednesday, when I noticed something odd as I stood in the West Wing of the White House, just a couple hundred feet from the Oval Office.

It's not very often that I've heard a phrase like that, especially one day after the inaugural. So my ears perked up at the possibility that I had bumped into the chief justice and landed a big scoop headlined, "Chief justice visits White House to apologize to president about inaugural snafu."

I really didn't even think about the possibility of a second swearing-in. It seemed so implausible. So I started digging around to try to confirm my assumption: that Roberts, mortified over the mix-up, had come over for a quiet and quick apology to the new president.

Instead I had stumbled upon a bigger story. White House officials confirmed to me that new White House Counsel Greg Craig had advised the president to get sworn in a second time, just to nip the issue in the bud and not let any controversy linger that perhaps the president had not been sworn in legitimately.

Listen to the successful second attempt »

"And out of an abundance of caution, because there was one word out of sequence, Chief Justice Roberts administered the oath a second time," Craig said in a prepared statement.

The move allowed one controversy to die, but a new one popped up.

Word started spreading that White House officials had invited just a small group of print journalists in to witness the historic moment a second time, but had failed to invite a representative from the five major U.S. television networks.

CNN and other television networks have complained to the White House but have not gotten a clear answer from White House officials about why the video cameras were locked out.

So the whole point of the ceremony -- getting the word out there that the president was in fact inaugurated -- was undermined by the fact that now there's no videotape to prove he was sworn in.

Not to mention that it may run counter to the main message the president was trying to deliver Wednesday with his executive order pushing for more openness in government.