WASHINGTON (CNN) -- With the signing of an executive order Thursday, President Obama put the U.S. military and CIA on the same page when it comes to interrogating prisoners captured in the war on terrorism. 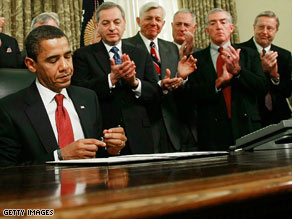 President Obama on Thursday signs several orders, one of which dealt with interrogating terror suspects.

The order requires both U.S. military and paramilitary organizations to use the Army Field Manual as the guide on getting information from prisoners, moving away from the Bush administration tactics that were considered torture by many.

The latest field manual interrogation procedures, issued in late 2006, clarified the rules approved by the Bush administration and other techniques that were available to interrogators and set a system of methods that would be uniformly understood and used.

The nearly 20 psychological techniques laid out in the manual include methods that stress incentives -- offering something for cooperating or taking away something when the prisoner is not being helpful -- and manipulating emotional states -- playing on fears or revenge or friendship.

The approaches steer clear of physical pain or severe mental anguish and do not involve touching a prisoner. The use of the techniques must be approved through proper channels.

The manual also lays out what is not allowed, including the technique of waterboarding, the use of military working dogs to scare or intimidate a prisoner, hooding, and depriving a detainee of food or water.

Other exclusions include forcing detainees to be naked, perform sexual acts or pose in a sexual manner. Beatings, electric shock, burns or other forms of physical pain also are not allowed.

The manual also gives oversight advice to prevent interrogators from going too far.

Unlike the unclassified Army Field Manual, CIA interrogation techniques have long been closely guarded, with the exception of the revelation that while in CIA custody, some of the accused 9/11 conspirators were subject to now-banned techniques such as waterboarding. U.S. lawmakers said they were shocked by the revelation.

In a hearing on Capitol Hill Thursday, the man nominated to be the director of intelligence, Adm. Dennis Blair, said the government would look at revising the Army Field Manual on interrogation rules, which leaves open the possibility that different techniques can be added for use by intelligence officers and not be publicized.

"We don't put things in there that our enemies can use against us. And we'll figure it out for this manual, which will be the manual for everyone to use," Blair said about secret interrogation techniques.

CIA Director Michael Hayden sent a memo to agency staff Thursday saying, "When our government changes its law or policy, we will follow that direction without exception, carve-out or loophole."

"As intelligence professionals, you, the men and women of CIA, will make the best possible use of the space the republic has given us to act boldly and bravely in its defense," he said. "I have every confidence in your enduring ability to do so, honoring, as always, the laws and values of the democracy we faithfully serve."

At the Pentagon, Defense Secretary Robert Gates said of the president's decision: "I think you have to weigh the costs of the more severe interrogation measures with, as the president talked about in his inaugural address, our values and the impact on our values."

"Personally, I believe that the need for measures that go outside the Army Field Manual is dramatically less than it was several years ago."

All About Barack Obama • Central Intelligence Agency • Terrorism • The Pentagon