By Sam Brownback
Special to CNN

Editor's note: Sen. Sam Brownback is a Republican from Kansas. 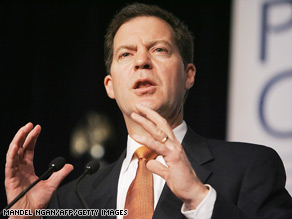 WASHINGTON (CNN) -- The most important responsibility for any president is the safety and security of the American people.

By issuing Thursday's executive orders, President Obama has ensured that his success or failure in matters of national security policy will be defined in part by what he does with detainees.

It amounts to a test of whether the promises of the campaign trail can be reconciled with the fundamental responsibility of protecting all Americans.

I disagree with setting a date for closing Guantanamo Bay's detention facility because I believe that adhering to a schedule is less important than preserving our security.

Now that the administration has committed itself to this course, however, it is imperative that it implement these executive orders transparently, comprehensively and with the cooperation of Congress.

Changes in detainee policy must be open and transparent to be credible. While reviews of individual cases must remain secret because they involve sensitive information, decisions about how detainees are processed and where they might be located should be discussed as openly as possible.

It is not enough to argue, as many have, that closing Guantanamo Bay will improve America's image or insist that it is simply the right thing to do.

The president must convince the American people that releasing detainees or placing them in other facilities will improve the level of security they enjoyed under pre-existing policies. That is no small task, but it is the challenge he has set for himself.

The Obama administration also must review all detainee policies comprehensively. I was pleased to hear that the administration intends to examine all of the legal, logistical and security issues associated with a detainee transfer. I am disappointed, however, that the order did not specify those issues in any greater detail.

These legal, logistical and security matters are enormously complicated and will require more than a cursory review of statutes and facilities. Interagency task forces, such as the one Obama has called for, can be effective policy instruments -- or they can reach the conclusions the president already prefers.

I hope the task force's work will be made public to the greatest extent possible, so that the American people can be sure it truly accomplishes its tasks and does not put a rubber stamp on a predetermined outcome.

Even before the new executive orders were issued, I introduced legislation in the Senate that would require a report to Congress outlining conclusions on specific, practical security matters.

These range from the space available to transfer detainees, to the adequacy of facilities and security measures necessary to protect the public as well as the types of facilities in the United States and abroad that should be considered before final decisions are made. I call on the administration's interagency task force to address the provisions of this legislation as part of its review.

Finally, the administration must be open to input from Congress. Though congressional debate over detainee policy is sure to be contentious, the administration will not be able to transfer all detainees out of Guantanamo Bay without statutory relief from Congress. Existing laws, for example, prohibit the co-mingling of detainees with other types of prisoners -- civilian or military.

Moreover, members of Congress, in close contact with their constituents, will have insights otherwise unavailable to administration officials. I have found, for example, that there is a popular misconception, even among Beltway experts, that Leavenworth, Kansas, can handle detainees because it is a prison town.

The reality is quite different. Fort Leavenworth's military prison is primarily a medium security facility; the base does not have a perimeter fence. A train frequently runs through the middle of the post, and civilian houses are within a few feet of the existing facility.

Moreover, the installation's primary mission is hosting the Army's staff college, which trains future Army leaders. In short, placing detainees there would create an attractive terrorist target. I assume other potential detainee destinations have similar concerns.

Detainee policy is a potent political issue, but concerns over public safety cannot be glossed over out of political expediency. Congress cannot be expected to adhere to an administration timetable for closing the Guantanamo Bay facility if it is not involved in considering how the United States will handle detainees in the future.

A year from now, we may find Guantanamo Bay has no more detainees. Or we may decide adequate facilities are not available elsewhere and leave some detainees at Guantanamo Bay for a longer period of time.

It is more important that we get it right than get it done by a date certain. For the new administration, getting it right means being able to look the American people in the eye and declare them safer than they are today. Only a transparent and comprehensive look at detainee issues can make that outcome possible.

The opinions expressed in this commentary are solely those of Sam Brownback.