(CNN) -- President Obama is facing great challenges as he takes office and may have made a hasty decision to close Guantanamo Bay without addressing all of the repercussions, Sen. John McCain told CNN's Larry King Thursday night. 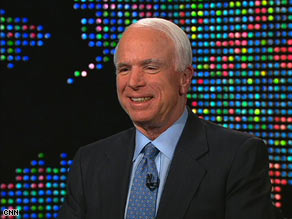 Sen. John McCain says he thinks President Obama should have considered where Guantamao prisoners will go.

"When Franklin Delano Roosevelt came to the presidency, it was economic challenges. We clearly faced the rise of Hitler and fascism, but early on it was mainly domestic issues," McCain said.

But President Obama has in front of him two wars, a crisis in the Middle East and a domestic economic crisis.

"This president faces domestic challenges and the national security challenges, so he's got a big job," McCain said.

Obama got to work from day one by ordering a halt to prosecutions of Guantanamo Bay prisoners, followed by an order to close the detention facility within a year and ban torture. But McCain told King he thinks the new president may have been hasty in the decision and should have taken the time to consider everything associated with closing the camp before forcing himself into a timetable.

"I think that it's a wise move," McCain said about closing Guantanamo Bay. "But I also think that we should have addressed this whole issue completely, because it did not address the issue of those who we have in custody and can't -- and no country will take them back. We should have addressed the issue of those who we know would pose a threat to the United States, but we don't have sufficient evidence to move forward."

Watch McCain talk about the problem with closing Guantanamo Bay »

McCain said instead of closing Guantanamo Bay outright, he would have first continued the military commissions, which "after years of delay and obfuscation" were finally moving toward trials.

Along with the order to close Guantanamo, Obama also set up a task force to advise him on strategies to relocate its prisioners.

McCain also expressed concerns over President Obama's proposed stimulus package, saying from where he stands, it "is more of a spending package than a stimulus package."

"I hope we can work together to, frankly, be a real stimulus package and not just a spending package that has every cat and dog and pet project that people have," he said. "Because the object of a stimulus package is to stimulate the economy, not to just spend more and run up the debt to our kids and our grandkids."

In addition to a real stimulus package, McCain said he believes the government should work to cut or eliminate payroll taxes.

"I think we should spend the money that we can immediately, but at the same time if we have a couple of quarters of positive GDP growth, then let's start reducing and eliminating the huge, massive, unprecedented deficits that are going to accrue from these actions," he said.

Despite some of their differing viewpoints on how to tackle the biggest problems the president will handle, McCain said he does plan to work with President Obama in any way he can.

"These are difficult times and whatever way I can assist and work with the president of the United States, I want to do it," he said. "And again, the American people are tired of the bitter partisanship."