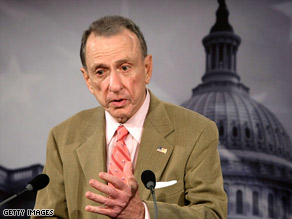 Sen. Arlen Specter is one of the GOP senators being pressured to support the stimulus bill in new ads.

The commercials blast House Republicans for refusing to vote for Obama's stimulus proposal this week, claiming that the GOP lawmakers took marching orders from conservative radio talk show host Rush Limbaugh not to support it.

The ad, paid for by the liberal advocacy group Americans United for Change, targets Sen. John Ensign of Nevada, Sen. Arlen Specter of Pennsylvania, and Sen. George Voinovich of Ohio. Specter is seeking re-election in 2010, while Voinovich is retiring when his term expires at the close of that year.

Each commercial follows the same script except that it changes the senator's name and state where appropriate.

The commercials are expected to run in each state for three to four days, according to an official with Americans United.

The group uses a Limbaugh sound-bite from earlier this month when the talk show host told his audience that "I hope he fails" as he spoke about Obama's term in office.

"Every Republican voted with Limbaugh and against creating four million new American jobs," a narrator says in the ad.

"We can understand why a extreme partisan like Rush Limbaugh wants President Obama's jobs program to fail, but the members of Congress elected to represent the citizens in their districts? That's another matter."

On Thursday, a large coalition of liberal advocacy groups including Americans United, announced that it was spending $500,000 to run television ads in the home states of five other Republican senators to pressure them to vote for the stimulus bill.