Obama gets laughs at Alfalfa dinner 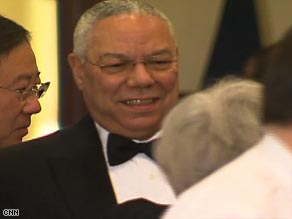 Colin Powell chats with other guests at the Alfalfa dinner in Washington on Saturday night.

The first African-American president began by poking fun at the club's historical roots.

"I know that many you are aware that this dinner began almost 100 years ago as a way to celebrate the birthday of General Robert E. Lee," Obama said, referring to the man who commanded the Confederate army during the Civil War.

"If he were here with us tonight, the general would be 202 years old. And very confused."

The ceremony was closed to the media. But the White House released excerpts of the president's remarks.

The Alfalfa Club was started by four Southerners in Washington's Willard Hotel in 1913. Its sole purpose was an annual night out for the boys, and it took its name from a thirsty plant that sends its roots deep down looking for liquid refreshment.

The club remained exclusively open to men until 1994, when women were admitted as members.

Obama saved most of his ribbing for his chief of staff, Rahm Emmanuel, who has a reputation for being quick to anger.

On the president's first full day in office, Chief Justice John Roberts re-administered the oath of office to Obama after they flubbed during the inauguration.

Obama said that in his first weeks as president, he has had to "engage in some of the toughest diplomacy of my life."

"And that was just to keep my BlackBerry," he said.

All About Barack Obama • Rahm Emanuel