WASHINGTON (CNN) -- Secretary of State Hillary Clinton sought Tuesday to shore up cooperation with two key European allies on Iran and other issues, capitalizing on the goodwill earned by the election of President Barack Obama. 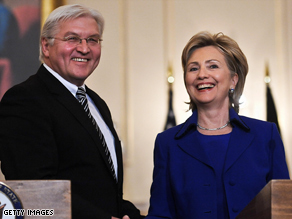 Clinton's European counterparts have been eager to travel to Washington to meet with her. Later this week, French Foreign Minister Bernard Kouchner will arrive.

After her meeting with Miliband, Clinton said the U.S.-British relationship "really stands the test of time."

"Our two countries have stood side by side confronting global challenges for a very long time," she said. "We share fundamental values and important fundamental objectives."

Miliband said his European colleagues are all "bringing a very strong message" of cooperation.

"We have heard what you and ... the Obama administration have said about the commitment to work with allies," he said. "But we also know that allies have to step up to build a strong working relationship. And I think that all the European foreign ministers who have come here don't just come with great expectations; they also come with a recognition that we all have to work better to make the international community achieve more."

Obama has said NATO should send more troops to Afghanistan and Europe should work harder to crack down on Iran's nuclear program.

"We are obviously concerned about Iranian behavior on a very broad base," Clinton said, when asked about Iran's Tuesday launch of a satellite into space. She pointed to a policy review "to approach Iran and how to influence its behavior going forward," and cited "increasing commonality" with U.S. allies in Europe and the Middle East for a more "effective and united approach."

"I think is a very important message," Miliband said.

Obama promised "tough and direct diplomacy with Iran," Clinton said. But "if Tehran does not comply with United Nations Security Council and IAEA mandates, there must be consequences," she said.

The U.N.'s International Atomic Energy Agency has been working on nuclear verification in Iran.

Clinton also told reporters Steinmeier advised her "about what is possible" in Afghanistan and how the United States and Europe can stay unified on the issue.

"We need our closest allies, like Germany, to help us ensure the success and stability of the Afghanistan nation at this very important moment," she said.

In a slight dig at tension between the United States and Europe during the Bush administration, Steinmeier said that a year ago when he visited the United States, "I could not possibly foresee that today we are talking to an American administration that in many points agrees with our stance and that agrees that we need to embrace those new opportunities not only to reduce the severity of international conflicts, but in some cases also find a resolution."