WASHINGTON (CNN) -- U.S. senators began debate on a massive economic-recovery package Friday evening, after a working coalition of Democrats and some Republicans reached a compromise that trimmed billions in spending from an earlier version. 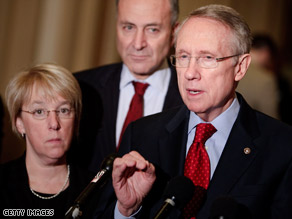 Senate Majority Leader Harry Reid is hoping for a vote on the $827 billion bill on Tuesday.

Shortly before 11:30 p.m., Senate Majority Leader Harry Reid told his colleagues that debate on the plan would continue on Saturday from noon to 3 p.m. Reid said a vote could come on Tuesday on the plan, which is championed by President Barack Obama as a tonic for a badly battered economy.

The movement came after days of private meetings between centrist Democrats and Republicans who felt the price tag on the Senate's nearly $900 billion version of the package was too much.

"There is a winner tonight," said Sen. Joe Lieberman, an independent from Connecticut and one of the moderates whose support was crucial in building support for the plan. "It's the American people and they deserve it."

"On the day when we learned 3.6 million people have lost their jobs since this recession began, we are pleased the process is moving forward and we are closer to getting Americans a plan to create millions of jobs and get people back to work," Gibbs said.

House Republican Leader John Boehner of Ohio issued a statement on the deal Friday night, saying, "Ultimately this bill should be judged on whether it works, and 90 percent of a bad idea is still a bad idea."

Boehner's criticisms echoed those of the House-passed bill; he said the plan was focused on slow-moving and wasteful spending rather than immediate relief.

A coalition of Senate Democrats and Republicans trimmed billions in spending from the massive economic recovery package. Here is an initial list of some of the items cut, according to a Democratic leadership aide.
Items cut

Sen. Ben Nelson, a Democrat from Nebraska and one of the chief negotiators of the plan, said senators had trimmed the plan to $827 billion in tax cuts and spending on infrastructure, housing and other programs that would create or save jobs.

"We trimmed the fat, fried the bacon and milked the sacred cows," Nelson said as debate began.

According to a senior Democratic aide, items fully eliminated from the plan include $55 million for historic preservation and $122 million for new Coast Guard polar icebreaker/cutters

According to several senators, the revised version of the plan also axed money for school construction and nearly $90 million for fighting pandemic flu.

Remaining in the plan are tax incentives for small businesses, a one-year fix of the unpopular alternative-minimum tax and tax-relief for low- and middle-income families, said Sen. Susan Collins of Maine, who was the most prominent Republican negotiator in the bipartisan talks.

"Our country faces a grave economic crisis and the American people want us to work together," she said. "They don't want to see us dividing along partisan lines on the most serious crisis facing our country."

While Democrats appeared to believe they had enough Republican support to push the compromise plan through, most GOP members still were speaking against the plan, saying spending is not the answer to cure economic woes.

"This is not bipartisan," said Sen. John McCain, who lost the 2008 election to Obama. "If this legislation is passed, it'll be a very bad day for America."

Minority Leader Sen. Mitch McConnell compared the plan to President Franklin Roosevelt's "New Deal" public works program, which he said did not help the nation out of the Great Depression.

"We're talking about an extraordinarily large amount of money, and a crushing debt for our grandchildren," said McConnell of Kentucky. "Now, if most Republicans were convinced that this would work, there might be a greater willingness to support it. But all the historical evidence suggests that it's highly unlikely to work."

Voinovich concluded that his "philosophical" differences with the approach of Republican negotiators was too great, a Voinovich aide said. The senator said he could no longer support efforts at compromise or the final bill, the aide said.

Sen. Dick Durbin of Illinois confirmed Democrats were in a tough debate over cutting what they saw as core programs. He singled out education as one of the largest areas of cuts -- and one of the hardest for Democrats to swallow.

"It's a painful area for all of us, as Democrats, to make these cuts in education assistance," he said.

There are "substantial" proposed cuts to a $79 billion fund created to help states deal with the economic crisis by giving them more money for schools, Durbin said.

Putting more pressure on senators was news Friday that employers slashed another 598,000 jobs off U.S. payrolls in January, taking the unemployment rate up to 7.6 percent.

"This is not some abstract debate. It is an urgent and growing crisis," President Obama said at a White House ceremony unveiling a new economic advisory board. "If we drag our feet and fail to act, this crisis will turn into a catastrophe."

The frenzy of meetings on Capitol Hill shifted into yet a higher and more powerful gear.

White House budget director Peter Orszag left a morning meeting in Reid's office but would not comment on negotiations. Senators who were meeting in their office buildings Thursday were negotiating directly with Reid just outside the chamber doors.

Learn what the bill includes »

The Senate has 56 Democrats and two independents who usually vote with them. There are 41 Republicans. One Senate seat from Minnesota remains open pending the outcome of an election recount challenge.