WASHINGTON (CNN) -- When U.S.-led forces toppled the Taliban after the 9/11 attacks, then-President Bush said the goal in Afghanistan was "to build a flourishing democracy as an alternative to a hateful ideology." 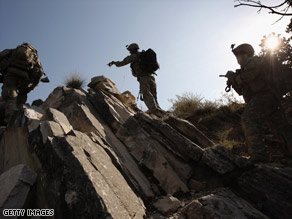 President Obama says he is sending an additional 30,000 troops to Afghanistan.

Seven years, billions of dollars and hundreds of U.S. casualties later, the goals are more pragmatic and modest.

The Obama administration's new special representative to Afghanistan and Pakistan, Richard Holbrooke, offered an understatement at the ceremony naming him to the post, telling the audience, "Nobody can say the war in Afghanistan has gone well."

Violence in Afghanistan is up. The Taliban continues to make a comeback and President Hamid Karzai is struggling to control the country, which with a rampant drug trade, threatens to turn into a narco-state.

President Obama has called Afghanistan and neighboring Pakistan the "central front in our enduring struggle against terrorism and extremism."

Watch what's ahead for Afghanistan »

But even as he promises to send 30,000 more troops to Afghanistan, a robust debate in Washington has begun about what the U.S. should try to achieve in a country that due to 2,000 years of conflict has been called the "graveyard of empires."

Senate Foreign Relations Committee Chairman John Kerry lamented that the U.S. has forgotten that its goal in Afghanistan was to fight al Qaeda and get Osama bin Laden.

"It was not to adopt the 51st state of the United States. It was not to try to impose a form of government, no matter how much we believe in it and support it, but that is the mission, at least, as it is being defined today," Kerry said during Hillary Clinton's confirmation hearing for her post as secretary of state.

Kerry warned that the U.S. risks getting bogged down in Afghanistan as it did in Vietnam -- parallels also drawn in the U.S. media.

The administration is conducting reviews of its policy in Afghanistan, including one by Gen. David Petraeus, the American commander in the region. The objective is simple: Define what the U.S. strategy in Afghanistan should be.

Defense Secretary Robert Gates cautions that goals have been too broad and need to be need to be more "realistic and limited," or the U.S. risks failure.

"If we set ourselves the objective of creating some sort of central Asian Valhalla over there, we will lose, because nobody in the world has that kind of time, patience and money, to be honest," Gates told senators, calling for more concrete objectives that can be achieved in the next three to five years.

At a minimum, the U.S. must help the Afghan government curb corruption and extend its authority to establish rule of law. That means a hefty component of civilian assistance.

The U.S. will increase development efforts and aid to strengthen the Afghan government, including additional nonmilitary aid for education, infrastructure, human services and alternative livelihoods for farmers to turn away from narcotics.

Part of the U.S. strategy will repeat the tactics used to help Iraq's "Sunni Awakening," in which Sunni tribal leaders united to fight insurgents and maintain security.

In Afghanistan, the U.S. will look for opportunities to engage with tribal and regional leaders, including those who might have been affiliated with or joined forces with the Taliban, insurgents Petraeus refers to as the "reconcilable Taliban."

For nuclear power Pakistan, extremists along its turbulent border with Afghanistan present an even greater threat to U.S. national security.

As he heads out next week for his first trip to Afghanistan, Pakistan and India, Holbrooke will seek to develop a regional approach to curbing extremism in Afghanistan and Pakistan as he did in the 1990s in the Balkans, which had a similar mix of different histories, cultures and traditions.

Holbrooke is expected to put more pressure on Karzai, amid a growing impatience with his inability to extend his authority, clamp down on corruption and deliver services to his people. Officials say there is a willingness to withhold U.S. aid if he doesn't deliver.

In Pakistan, Holbrooke will seek stronger cooperation from the government of Asif Ali Zardari to crack down on extremists along the Afghan border and in the tribal areas seen as sympathetic to the Taliban and al Qaeda.

Another part of Holbrooke's job will be to streamline the U.S. programs and assistance for Afghanistan and Pakistan and direct them toward the immediate goal of stabilizing the region.

"If our resources are mobilized and coordinated and pulled together, we can quadruple, quintuple, multiply by tenfold the effectiveness of our efforts there," Holbrooke said at his appointment.

Coordinating a strategy will require a toughness and sense of purpose that has been lacking in U.S. policy toward the region.

No one can question Holbrooke's toughness. The architect of the Dayton peace accord in the Balkans is, after all, famous for strong-arming the strongest willed of leaders -- such as former Yugoslav President Slobodan Milosevic.