WASHINGTON (CNN) -- Leading Republicans warned Sunday that the Obama administration's $800 billion-plus economic stimulus effort will lead to what one called a "financial disaster." 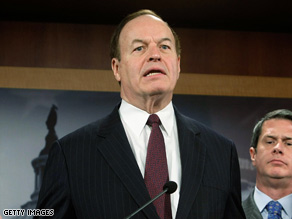 The country will "pay dearly" if it executes the president's stimulus plans, Sen. Richard Shelby says.

"Everybody on the street in America understands that," said Sen. Richard Shelby, the ranking Republican on the Senate Banking Committee. "This is not the right road to go. We'll pay dearly."

Shelby, of Alabama, told CNN's "State of the Union" that the package and efforts to shore up the struggling banking system will put the United States on "a road to financial disaster."

But Lawrence Summers, the head of the administration's National Economic Council, said Republicans have lost their credibility on the issue.

"Those who presided over the last eight years -- the eight years that brought us to the point where we inherit trillions of dollars of deficit, an economy that's collapsing more rapidly than at any time in the last 50 years -- don't seem to me in a strong position to lecture about the lessons of history," Summers told ABC's "This Week."

President Barack Obama, his advisers and the Democratic leaders of Congress argue the roughly $830 billion measure will help pull the U.S. economy out of its current skid. Much of the package involves infrastructure spending, long-term energy projects and aid to cash-strapped state and local governments.

The nonpartisan Congressional Budget Office reported last week that the measure is likely to create between 1.3 million and 3.9 million jobs by the end of 2010, lowering a projected unemployment rate of 8.7 percent by up to 2.1 percentage points.

In a concession to Republicans, about a third of the bill involves tax cuts. But the measure is expected to have only minimal GOP support when it goes to a scheduled vote early this week.

The version of the bill that passed the House of Representatives had no Republican votes.

"We need to spend money on infrastructure and on other programs that will immediately put people to work. But this is not it," said Sen. John McCain, R-Arizona, last year's GOP presidential nominee.

Senators reached a tentative agreement Friday on a compromise bill largely negotiated by a handful of moderate Republicans whose votes are needed to prevent a filibuster. But McCain told CBS' "Face the Nation" that the package should have been about half the size of the one now before senators, and should be balanced between tax cuts and spending.

"We're going to amass the largest debt in the history of this country, by any measurement, and we're going to ask our kids and grandkids to pay for it," he said.

The stimulus bill includes about $45 billion in transportation spending, much of which can be spent on projects "that can be implemented immediately," Transportation Secretary Ray LaHood told CNN. LaHood, a former Republican congressman from Illinois, said he would talk to his former colleagues on Capitol Hill "and do all that I can to persuade them that this bill really will put people to work."

He said he invited state transportation chiefs to Washington for a Wednesday meeting on how to create jobs using funding from the stimulus bill.

"There aren't going to be any boondoggles. This money will be spent correctly, by the book, with no shortcuts," LaHood said.

Shelby said Obama and his advisers need to address the staggering problems in the U.S. banking system first.

Shelby also has been critical of other efforts by the federal government to help the struggling economy, including legislation that would have provided a bailout to the auto industry.

But Sen. Kent Conrad, the chairman of the Senate Budget Committee, told CBS the current recession -- which has already produced an unemployment rate of 7.6 percent -- is in danger of a deep downturn "like we saw in the Great Depression."

"If there is a failure to give a significant boost to this economy, this crisis will only deepen and become far more serious," said Conrad, D-North Dakota.